Third part of Bénédicte Meffre’s analytical work on German embroidery. After the definition of Opus Teutonicum, and the colored figurative embroidery, here is a description of the counted stitch embroidery

In the previous article, we stopped with this border of the cover of a 15th century altar cushion.
Unlike the rest of the piece, on the damaged areas of the border, there is no ink line on the fabric, the pattern is not traced and is repeated identically, down to the stitch, throughout the border. This is a grid embroidery.

Definition of grid embroidery
A grid embroidery is an embroidery made from a model that is transferred stitch by stitch. This pattern is presented in the form of a grid where each dot (or square as in the example kept in Cologne) corresponds to an embroidery stitch.
This technique has the advantage of being able to produce a precise pattern that can be repeated endlessly. It is particularly suitable for friezes or repeated motifs in tiles such as certain heraldic motifs. 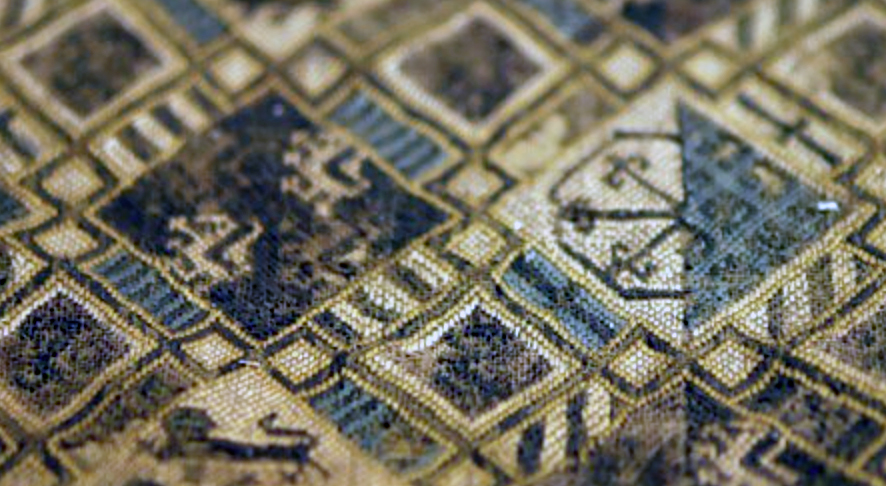 In this case, and unlike the examples we have seen in previous articles, the pattern does not need to be traced on the fabric.

Stitches used
A majority of these pieces are made with a straight stitch. Is it finally, the famous brick stitch that we have been talking about from the beginning? When you look at it more closely, it is, again, more varied.
I have selected a corpus of 44 medieval embroideries which seem to have been made from a grid. To select them I note the patterns that are repeated, the patterns stylized and simplified to correspond to a grid or the fact that the stitches are never interrupted or distorted to fit into a drawn design.
You can find some of the embroideries selected on this board Pinterest.

On these 44 pieces I have separated the stitches into two groups [1]. Some pieces present several techniques, hence a total greater than 44:

I suggest to detail for you three of these stitches: long-arm cross stitch, satin stitch and brick stitch [2].

[1] In needlepoint, it is common to separate the techniques in cross stitches on the one hand and straight stitches on the other hand. Many stitches are in fact variations around the same base.
[2] The names and explanations of the stitches are closely linked to the style of embroidery to which they are attached and medieval needlepoint is not exactly formalized from this point of view. In museums or exhibition catalogs, stitches are designated more or less precisely, often by generic terms such as tapestry stitch, regardless of the exact stitch used. In modern embroidery manuals, the names may vary according to the context or the style (free hand embroidery, needlepoint, blackwork, crewelwork, or needle painting). Most often the discrepancies are made on the variations of basic stitches, in particular on very precise styles like the one which concerns us here. In this article, I have tried to suggest simple and generic names to easily find references while describing precisely what I am talking about to avoid any ambiguity. This balancing act was not without difficulty and made me postpone the publication of this article for a long time. 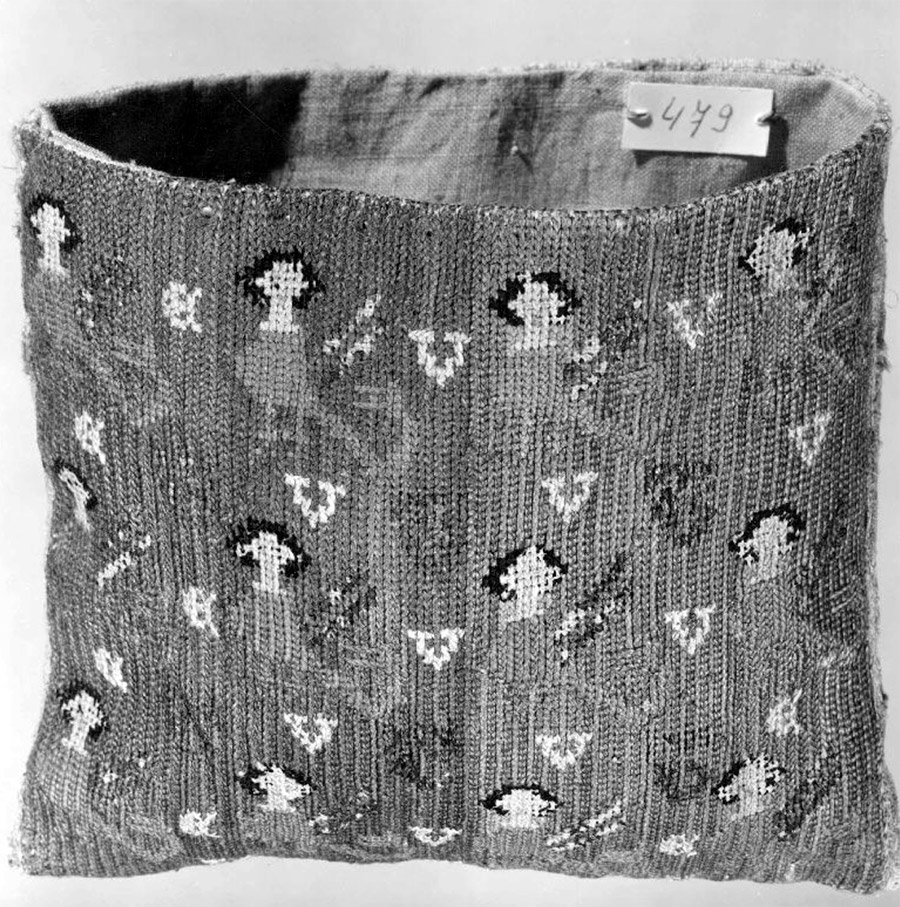 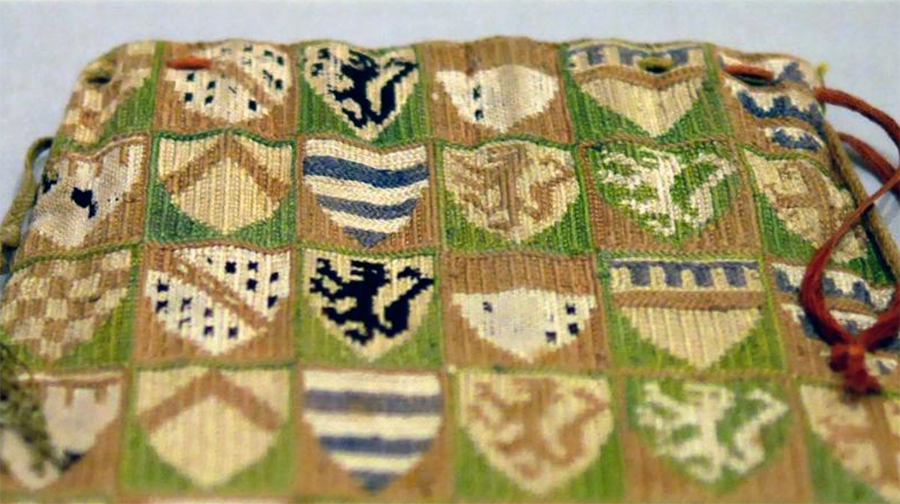 We have here another example, with this chaplain where we can notice that each pattern is treated independently and the direction of stitching can be horizontal or vertical as needed. 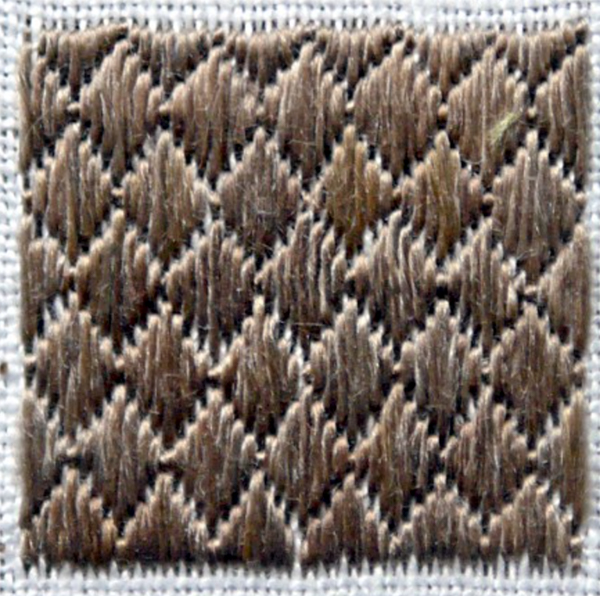 Straight tapestry stitch – straight stitch
This is a straight counted stitch: the weft of the fabric is perfectly followed and the stitches are arranged parallel to each other. By varying the length and offset between each stitch, different patterns and textures are obtained. 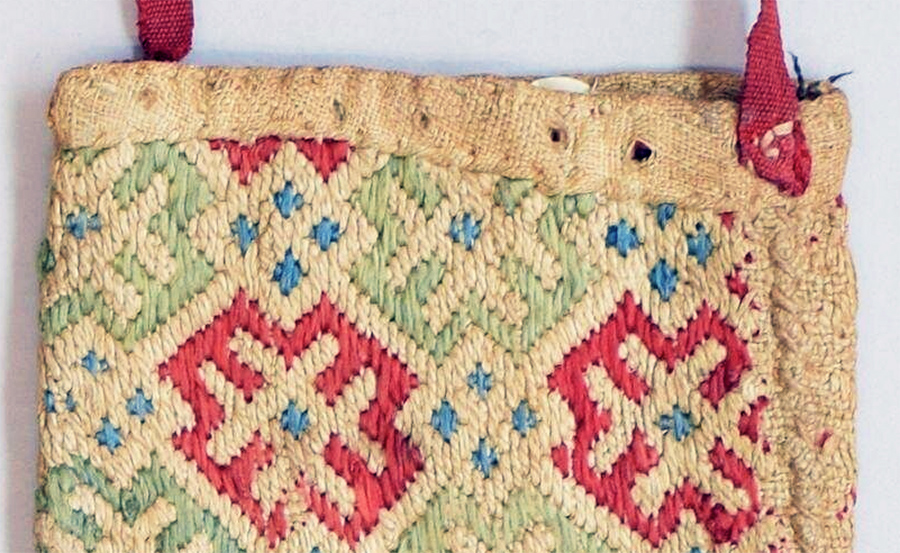 Satin stitch
In needlepoint, satin stitch is a technique where the length of the stitches is adapted to the pattern. Indeed the satin stitch is a stitch that covers the pattern right through as in the example on this bag from the 15th century. The motif is repeated regularly but the stitches are not all of the same length: the colored branches, for example, are made with stitches of different lengths on the area to be covered. 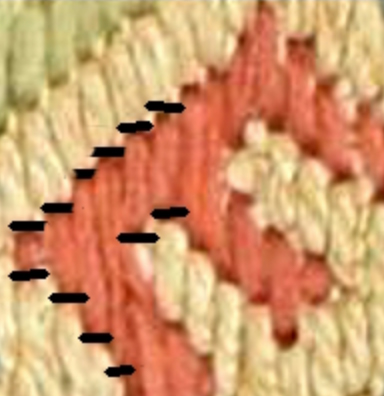 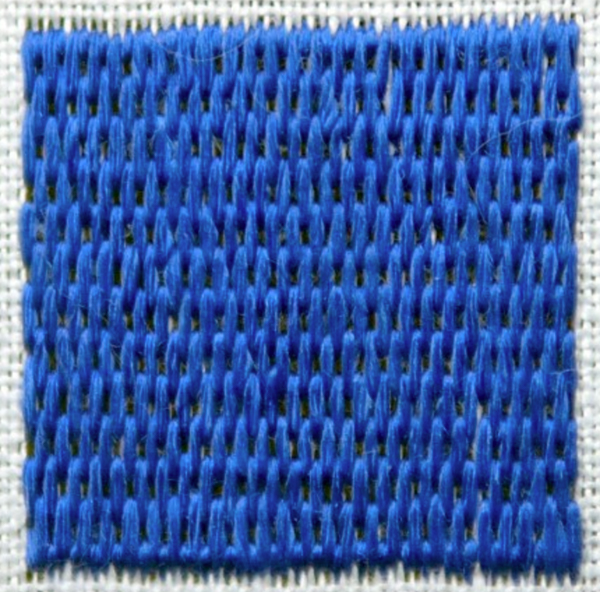 Brick stitch
The brick stitch is a variation of the straight stitch in which the stitches are done in a staggered fashion to form a brick pattern. All stitches are the same length, and each stitch is offset by exactly half of its length from its neighbors: in the case of grid embroidery, the pattern must correspond exactly to this pattern and therefore must be designed accordingly. 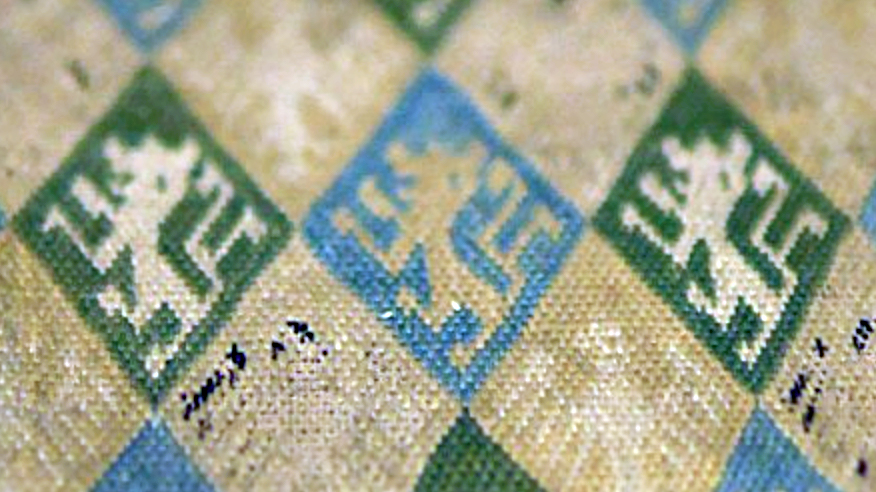 On this 14th century chaplain fragment, the lions have been drawn so their shape matches an exact number of stitches of equal length and their offset is precisely half their length. Well, some adjustments have been made but they are very small! 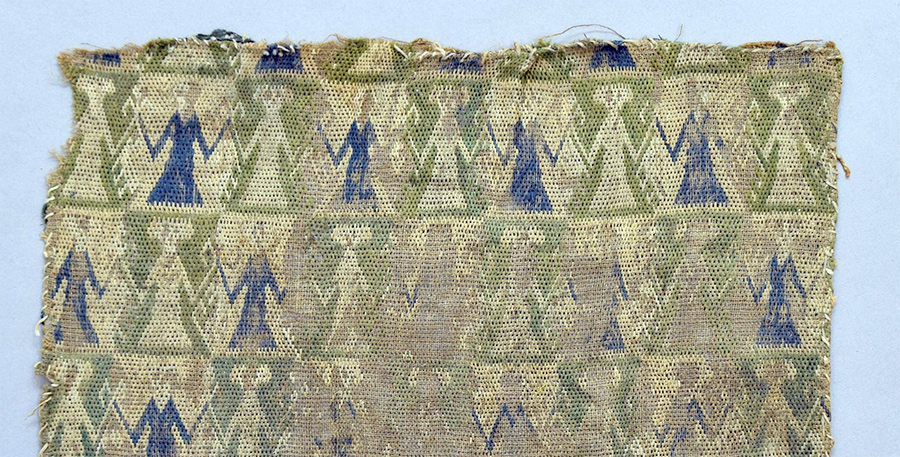 On this fragment of embroidery, we can also observe the consequences of working in brick stitch on a pattern. We can see the staggered offset on the heads of the characters, or the fact that with this technique it is impossible to embroider a clear horizontal straight line. 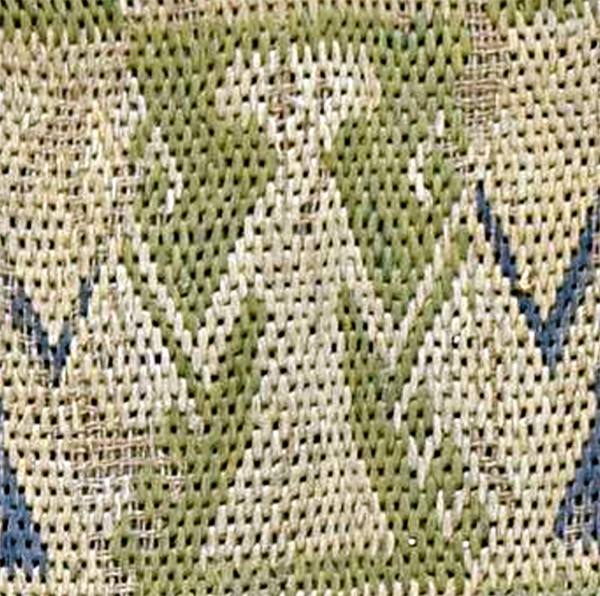 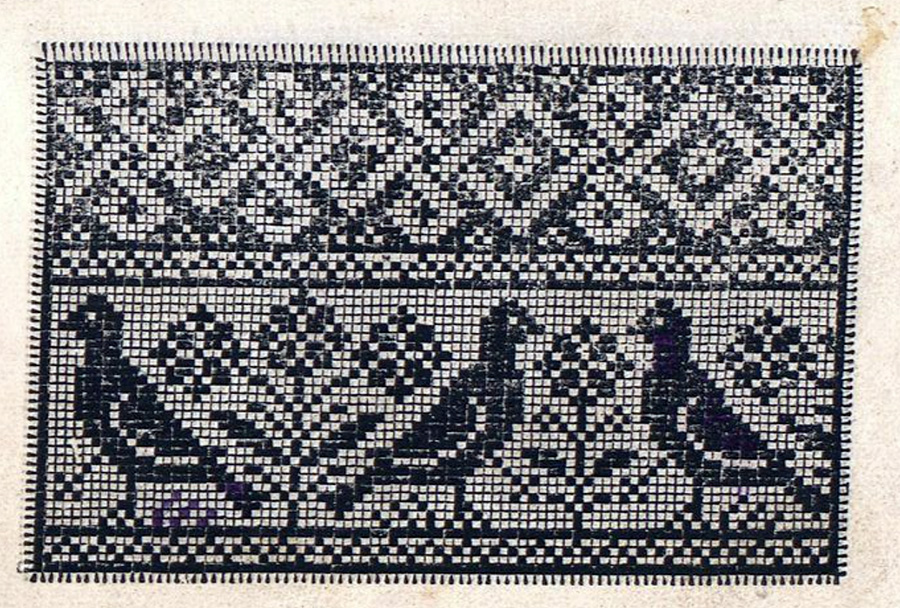 Creation and transmission of patterns
As this type of embroidery is not drawn on the fabric either directly by a painter or transferred by means of a stencil [3], one can wonder how they were transmitted and how they were diffused.
Unfortunately, little is known about grid models of the Middle Ages. There are several ways to keep track of this: the grid designs or the embroidered samples.
[3] See on this subject my 2 articles (in French) which evoke the question of the techniques of drawing and reproduction of the drawn models: How to draw for an embroiderer and An end with the syndrome of Penelope where the question is discussed. 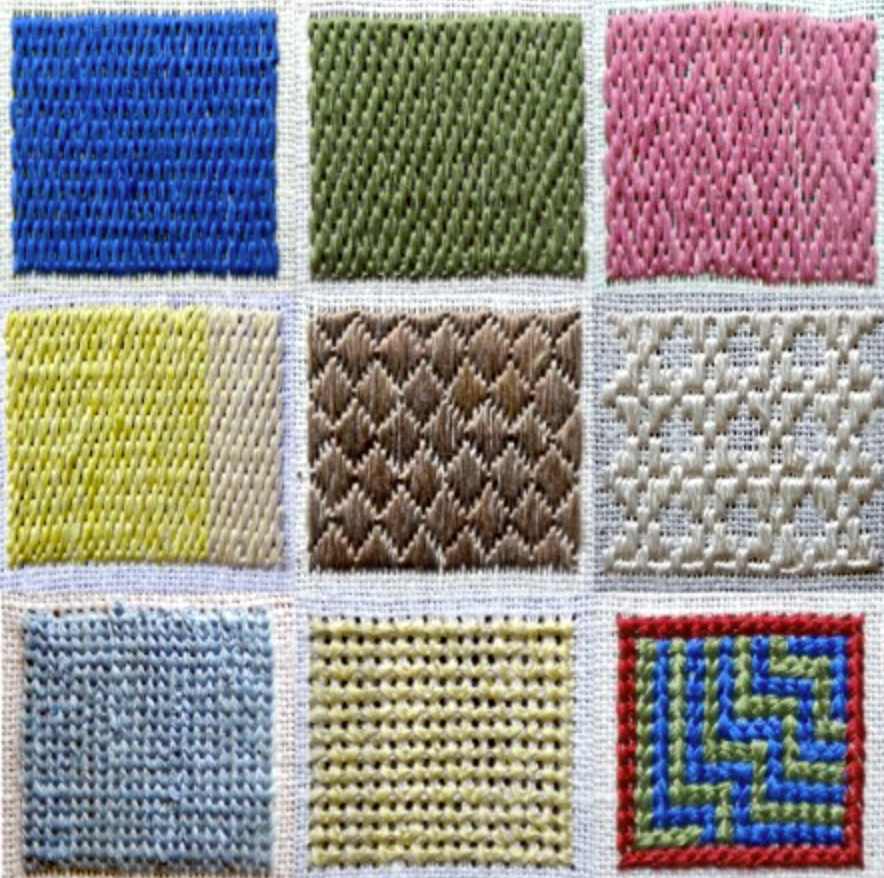 During the Renaissance, collections of models spread thanks to the development of the printing press and a diversifying clientele: both professional and amateur (in the context of domestic needlework) [4]. The oldest work known to date is Schonsperger’s Furm oder Modelbuchlein dated 1523 [5].

[4] The first printed works were systematically dedicated and explicitly addressed to professionals and to women practicing needlework as amateurs.
[5] A list of these model collections can be found on the website modelbuch.com. 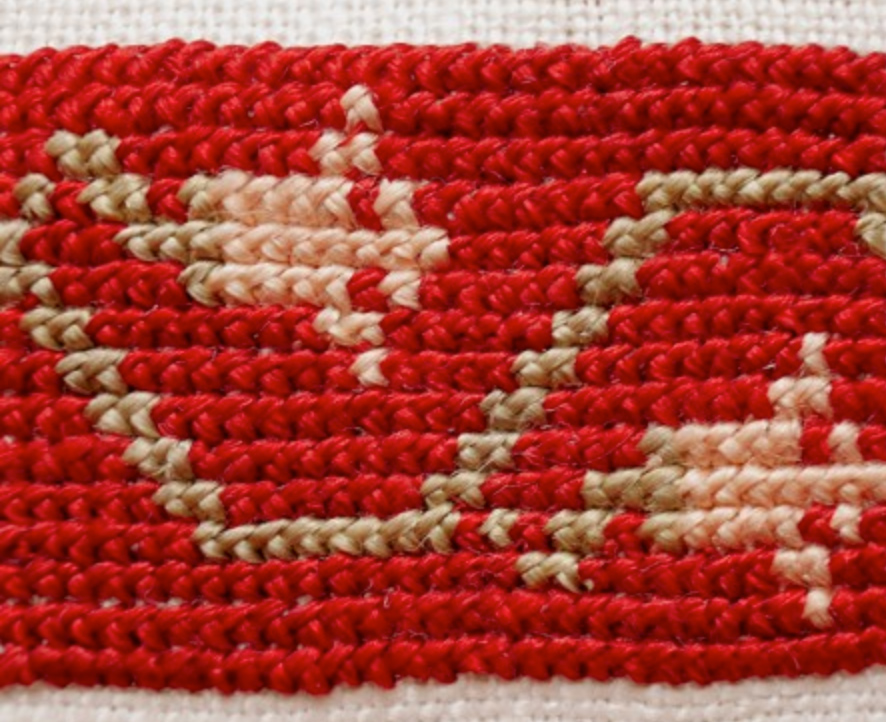 Sample: reproduction of the border of the 15th century embroidered cushion © Bénédicte Meffre

Before this date, there were model boards for painting and for embroidery. However, nothing is known about charts specific to this type of embroidery (and other needlework). Since a seasoned embroiderer can extrapolate a grid from a line-drawn pattern, this type of board may never have existed.

When it comes to the samples, as a textile object of low value, their conservation was not guaranteed. Indeed a sample strip can be a very basic example of stitches or patterns in the  style shown here. 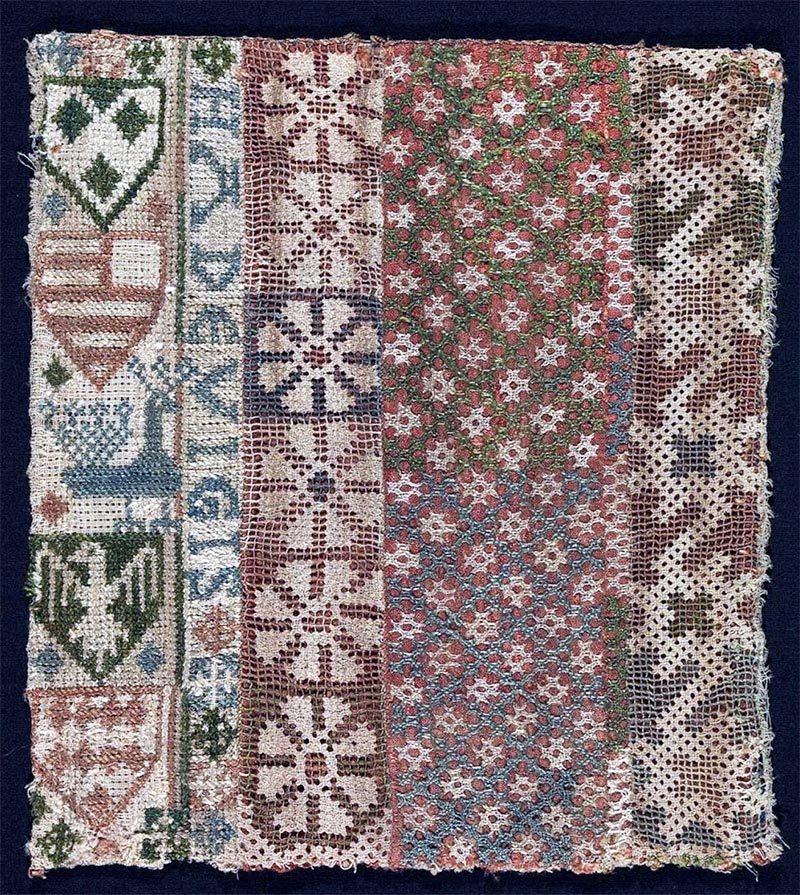 However, some model books from the late Middle Ages are used as a sample and portfolio, to show the craftsmanship of their makers [6] and not to convey the patterns. Can we imagine that some embroidered pieces that have been preserved as a fragment in church treasures, could have been samples?