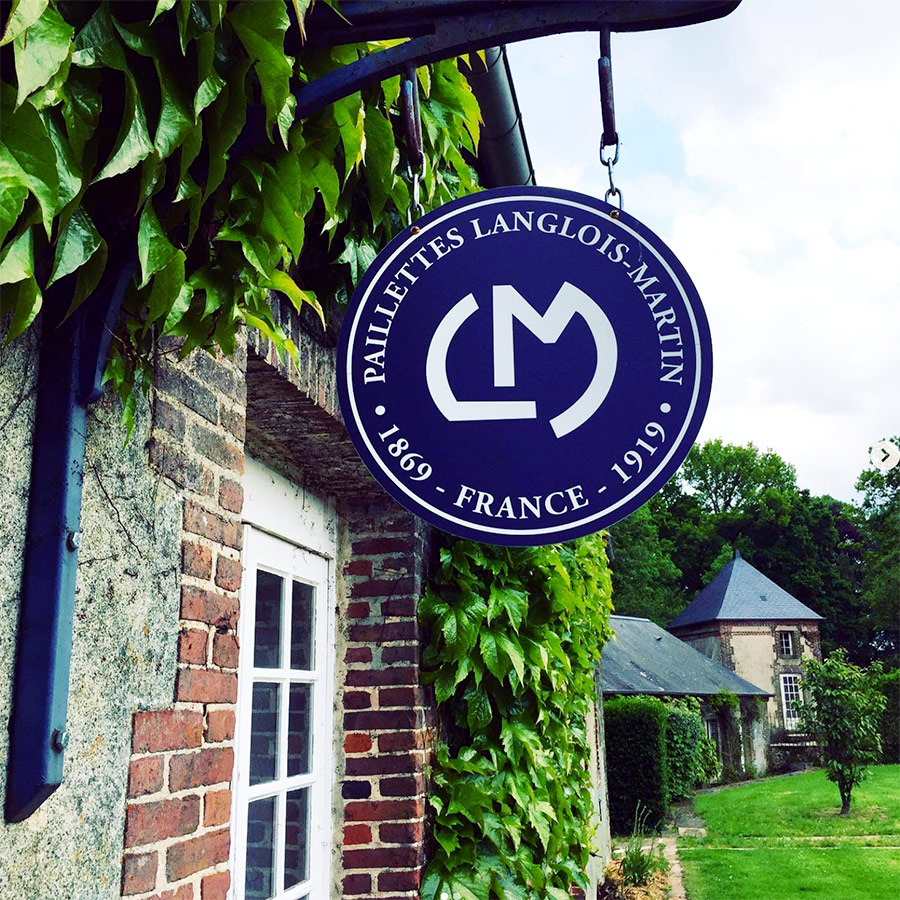 The world of sequins… A universe closely linked to embroidery, in particular to that of Haute Couture. Behind these little colored pieces hides a long story of tools, chemistry, encounters. I present to you the Manufacture Langlois-Martin, the last sequin factory in France. I was able to exchange a long phone call with Jean-Baptiste Drachkovitch, one of the owners. Visibly passionate, he agreed to answer my questions and introduce me to (almost!) all the secrets of this very special universe. 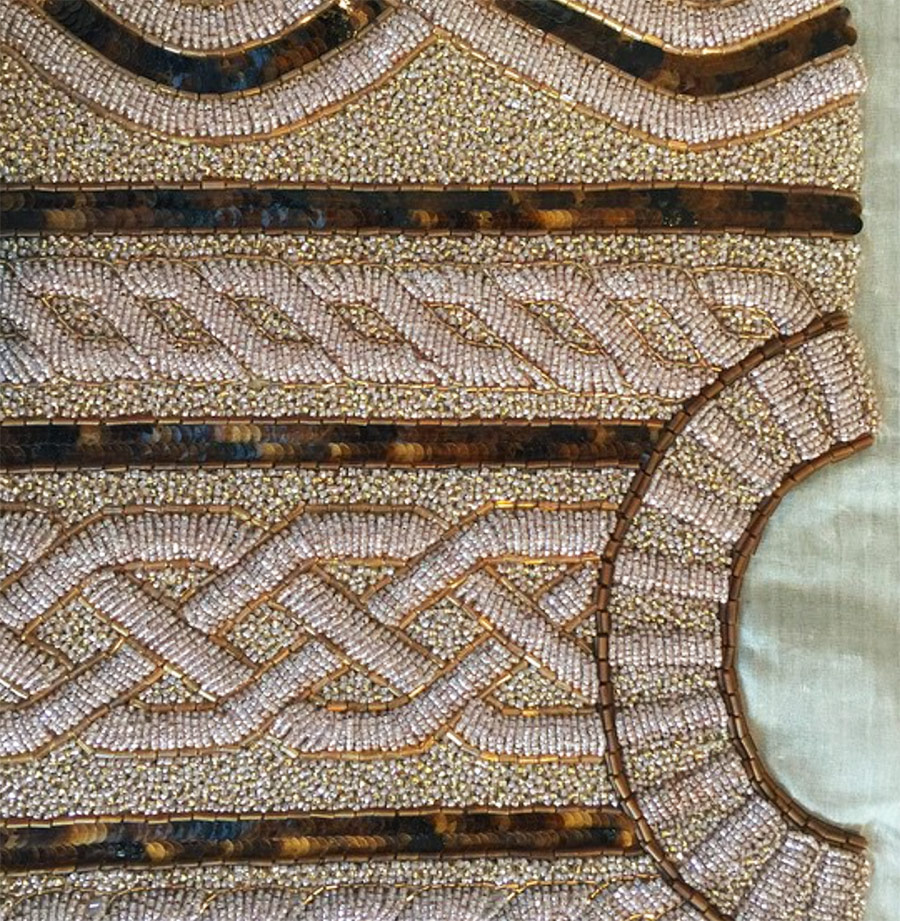 Until the 18th century sequins were made of metal – silver or gold. But their weight and costs did not allow wide distribution*. Then came the idea of cutting them in sheets of gelatine (the same pork gelatine used in cooking!) – these magnificent pieces couldn’t be washed! To the naked eye, they are no different from plastic sequins and it has happened recently that embroiderers have seen all their long labor reduced to nothing for having chosen these sequins from the reserves of an embroidery workshop! At the first burst of steam, they melted…
*These sequins are still made by those who make metallic threads such as purl pearl, smooth purl, etc. 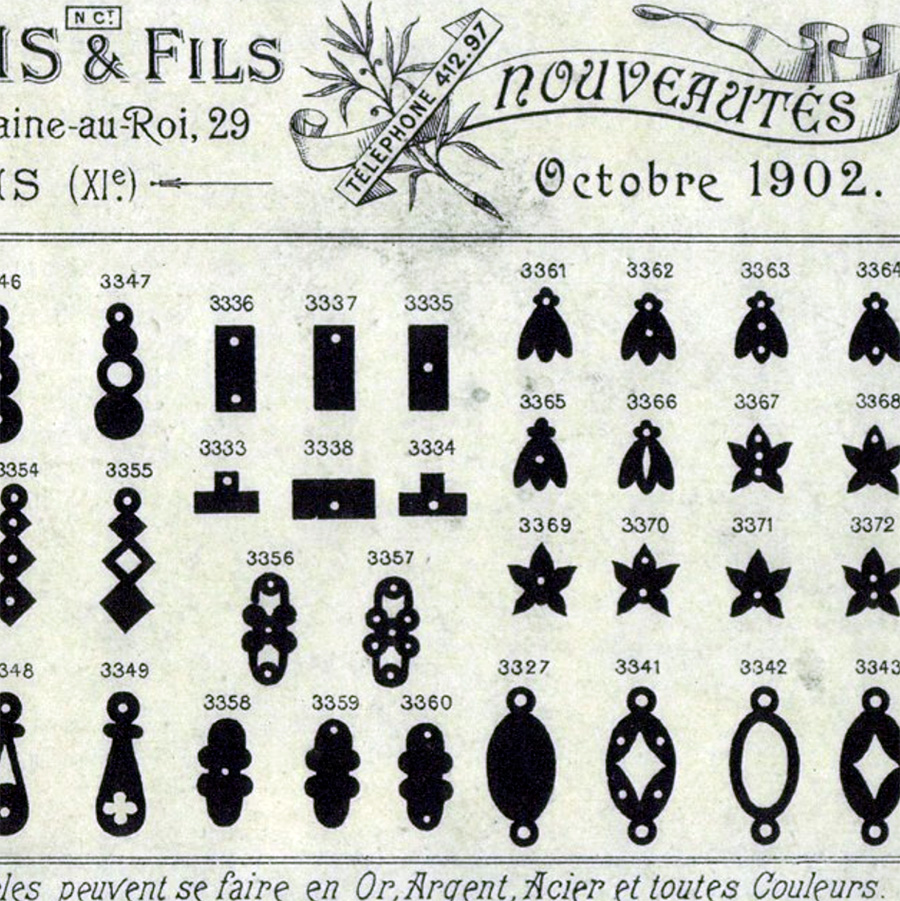 The first factories date from 1869. There were up to 70 of them in France.

At the end of the 19th century, three innovations will allow the development of sequin factories: the arrival of Haute Couture with the Worth house, the use of the Lunéville hook to quickly embroider decorative elements on fabrics and the diffusion of glass beads (Italy and Bohemia). The craze for clothes and accessories covered in sequins and pearls reached its peak in the 1920s and 30s. 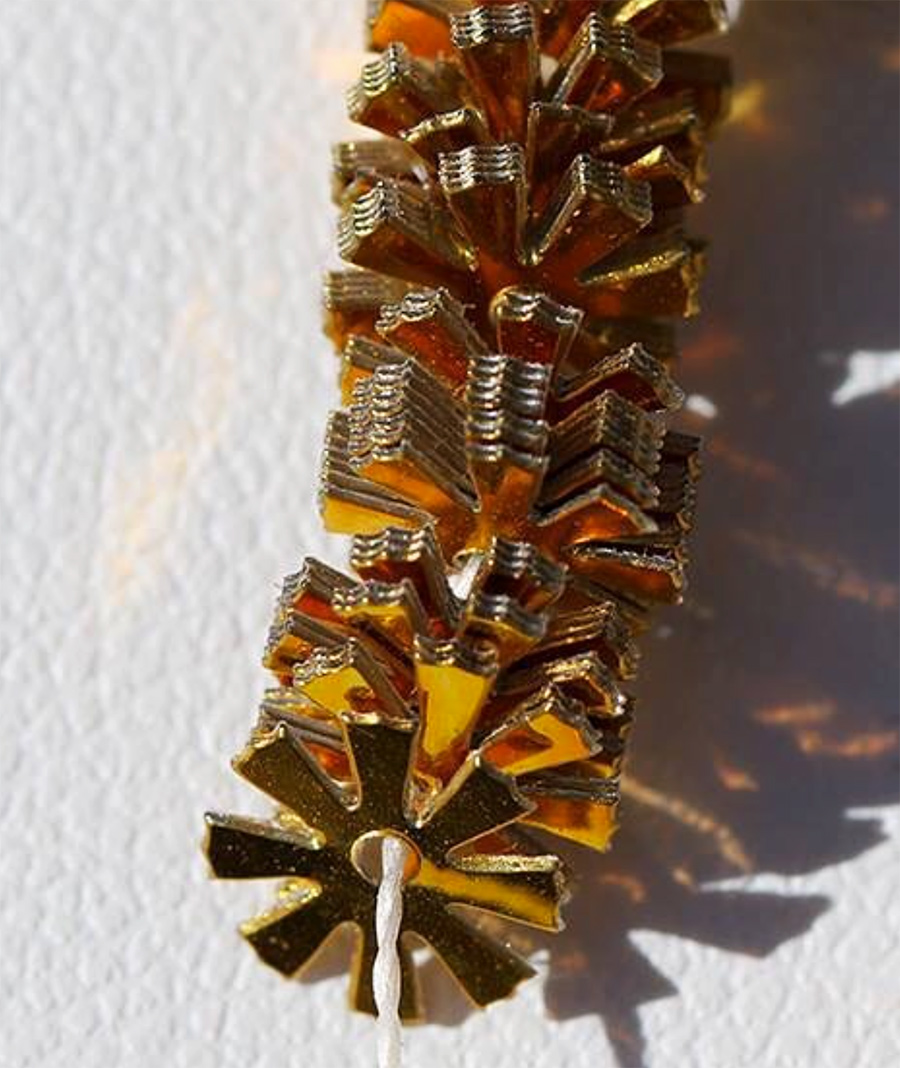 After the Second World War, we will switch to two main components: cellulose acetate and PVC (Polyester will arrive later). The first is made of wood or cotton fibers, chemically transformed. The second comes from petroleum. Note that cellulose acetate was known since 1864 but it was not yet used to make sequins.
It was in 1919 that Marcel Langlois created a house that would remain in the family for three generations. In the 1940s and 1960s, the strongest factories bought out the weakest. In 1976 there are only three left. In 2001 Langlois-Martin is the last one left. With serious advantages gleaned over the years: historical and unique tooling of more than 5000 pieces, archives (when they have not been destroyed…) and unparalleled know-how. 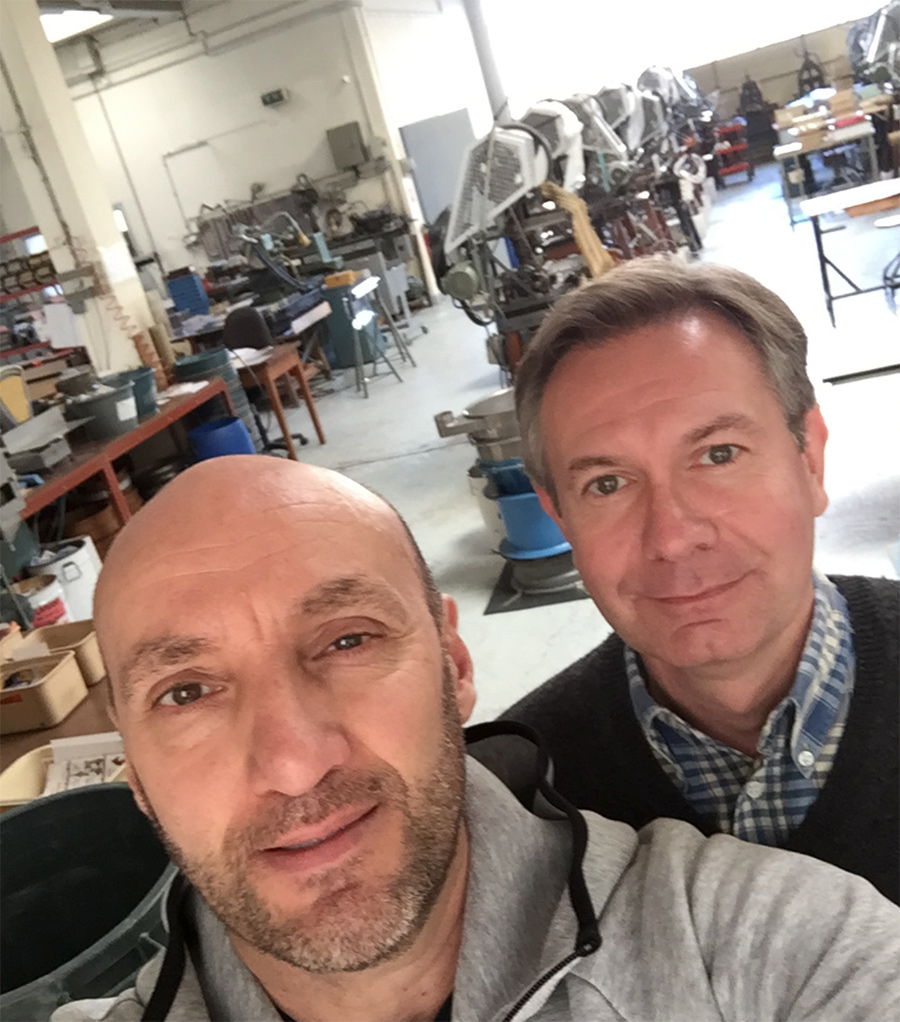 Jean-Baptiste Drachkovitch enters the scene. Young, he was destined for philosophy but after being bored in preparation for Normale Sup, he decided to train in fashion (in full revival in the mid-80s). He learned design and model making at the Ecoles de la Chambre Syndicale de Paris while adding training as an embroiderer at Lesage. Years later, he learned from a sequin dealer for Langlois-Martin that the family wanted to sell their factory.
Chanel willingly buys the art houses (without sequins, what would become of them?) but things are complicated in terms of accounting with the heirs. Jean-Baptiste Drachkovitch proposed his candidacy with his friend Pascal Bernard and they thus became the owners of the venerable house. It was then in Noisy-le-Sec, near Paris. “We stayed there for 7 years but we found that with the internet it had become unnecessary and expensive to keep a “showroom for couriers” in Paris, and we moved to Normandy – just before the pandemic! »
The team is small – 5 people so far. There is no training to do this job: “We all get there by chance, we train on the job”. You have to like precise and even delicate work, while being strong enough to carry 50 kg rollers! It is also important to have manual skills and know how to count. 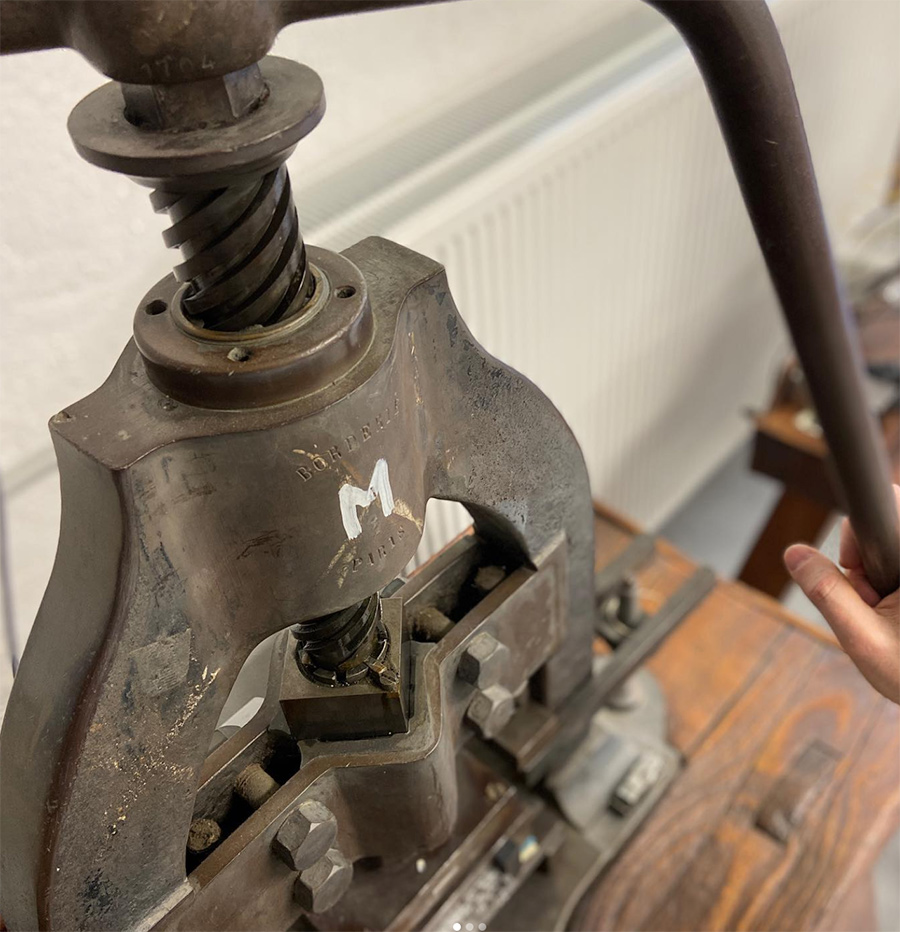 On the technical side, they have 5,000 hardened steel tools. They are quite small but very heavy. The largest is 20cm by 30cm and weighs 25kg! To make a similar tool today it takes almost 10,000 euros. We are here in craftsmanship more than in industry: these tools come from various factories, they are all of different sizes. It is therefore necessary to cut the acetate plates to the sizes of the tools.
When ordering, the customer chooses the shape (among 5000) and the color (1600!). The tool will depend on the sequin: “Our ancestors had a twisted side: tools sometimes cut 1 to 5 sequins at a time, no more!” 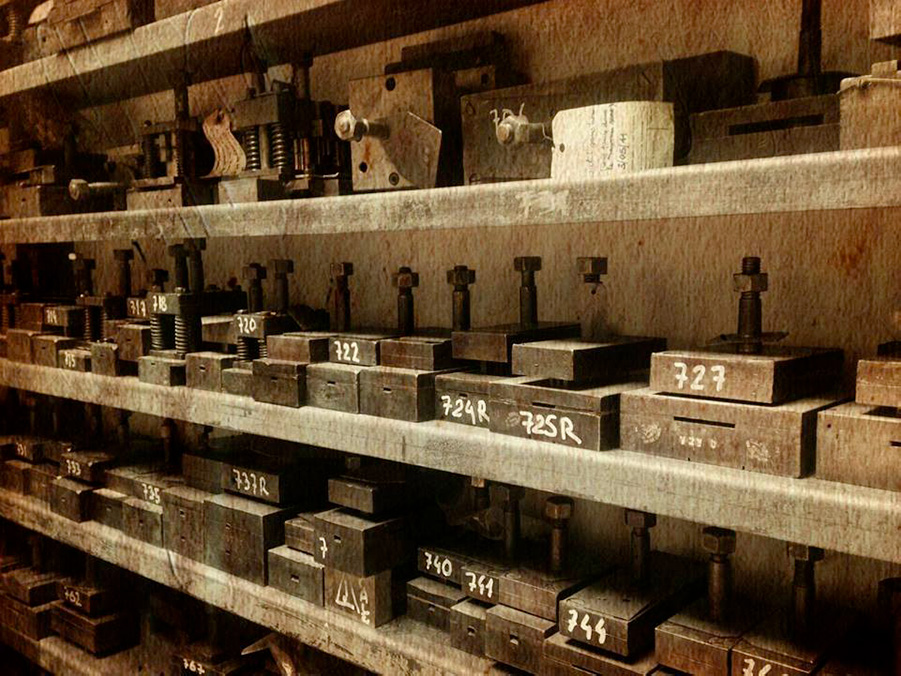 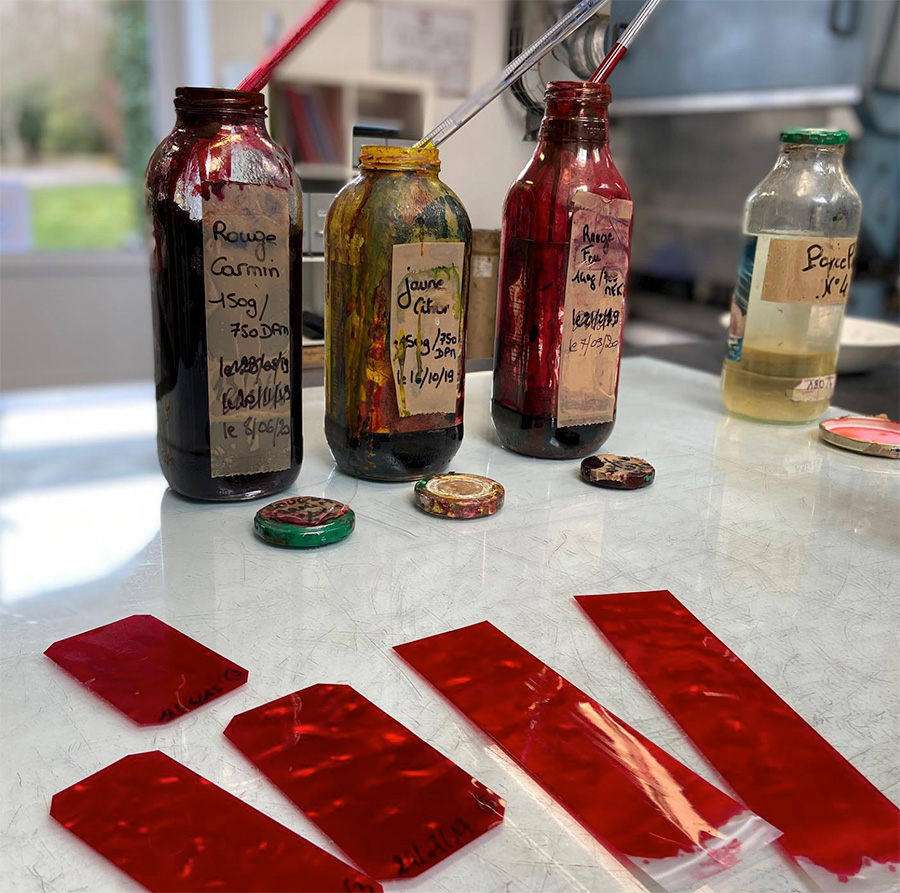 We start by coloring the acetate or PVC plates.
The production of Maison Langlois-Martin is 80% based on acetate. This is much more expensive than PVC, but it is more ecological and has the advantage of being manufactured in Europe. It is also much more economical in terms of energy and varnish (to color the sequins). At Langlois-Martin, coloring can still be done by hand. A significant gain in varnish is thus achieved. Indeed, the work by hand generates a loss of about 20% of varnish, when this is almost 80% for machine varnishing because the retention tank must always be full. “It is our eco-responsibility. But with the price of crude soaring, the prices of plastics from petrochemicals have increased significantly, acetate has been less impacted; it rebalances things a bit even if we still have a ratio of 1 to 4 in terms of price…” 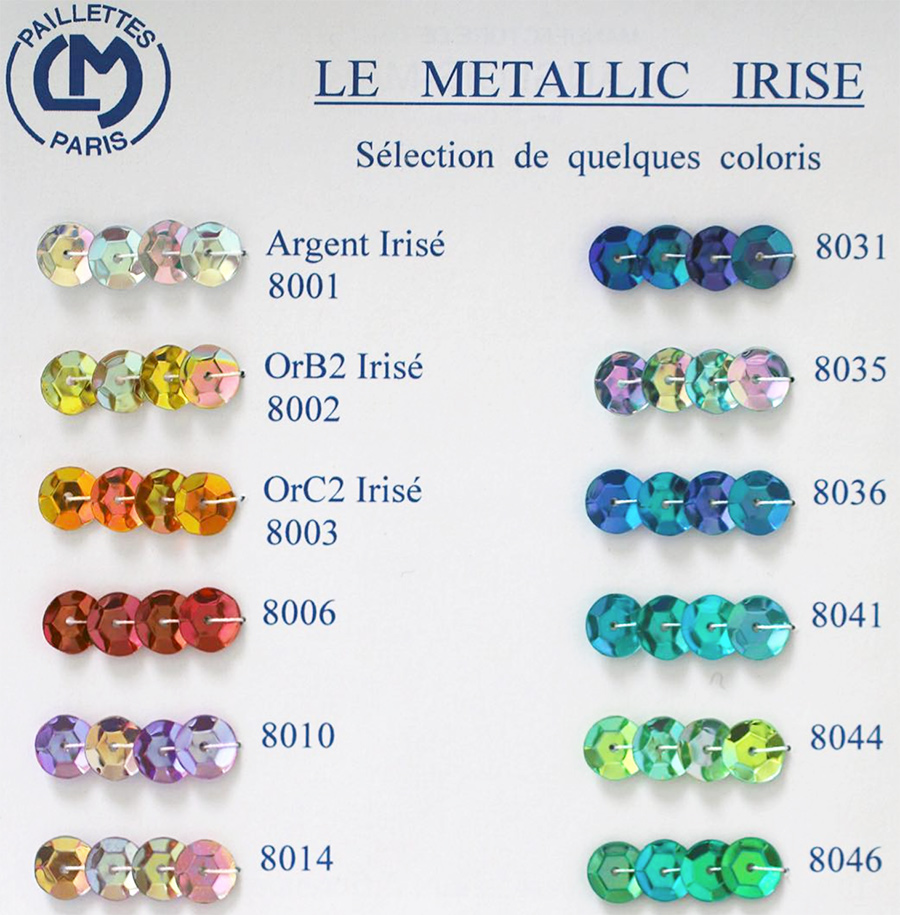 The plates have 3 different thicknesses which are chosen according to the final spangle. There are also 7 types of base materials (black, white, ivory, transparent, perliane, etc.) used to achieve more than thirty aspects. We will varnish both sides using secret techniques. The shades are coordinated, each having a color code that is found in each style: 4616 in pearly coordinates with 2016 in Metallic or 3016 in Iridescent for example. 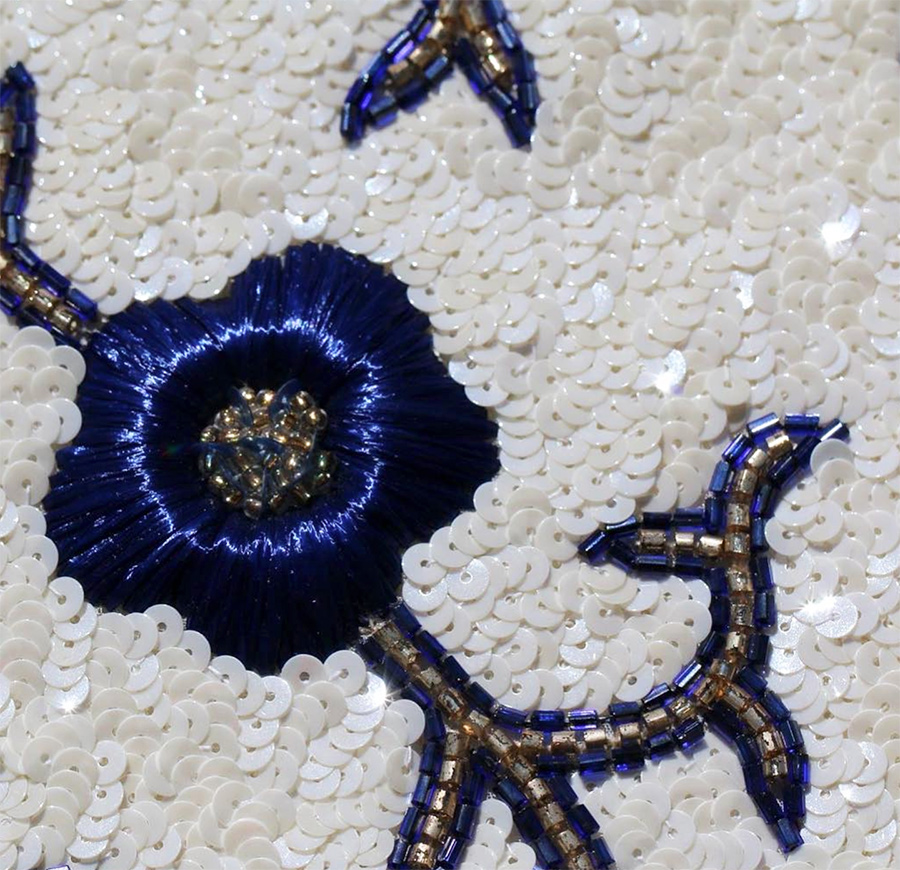 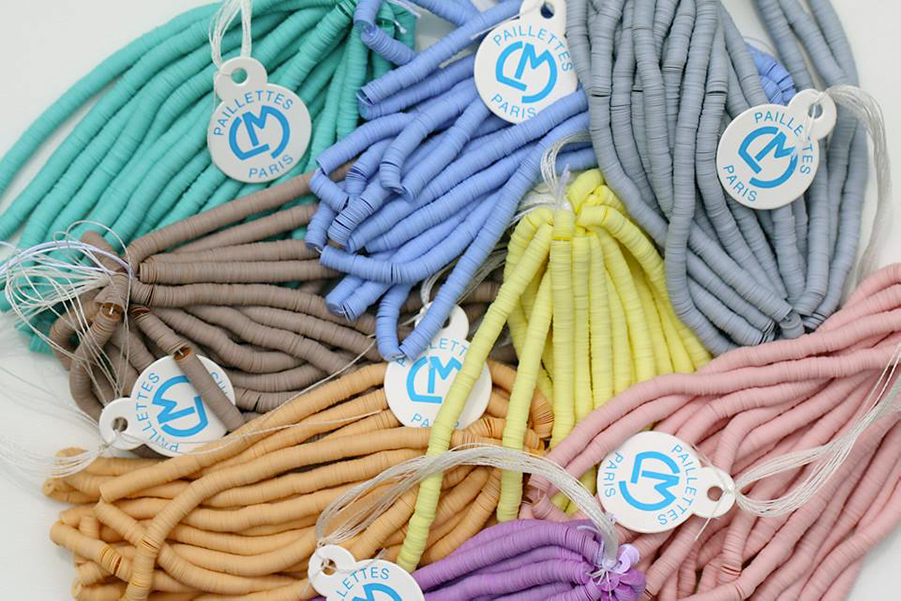 The tool of the chosen model is then inserted into the machine, a pendulum cutter with a screw at the top. With each stroke of the pendulum, the cutter cuts the number of sequins corresponding to the tool**. Haute couture-related orders are never so large that they require a large industrial machine: the patterns are most often for additional ornamentation while full backgrounds are made with classic sequins. In the end, the old tools still correspond to current needs.
For classic sequins (cup or flat), Langlois-Martin has automated machines that can produce them more quickly in large quantities.
**This cutter is also used to cut artificial flowers at Lemarié for example, or even to make springs. 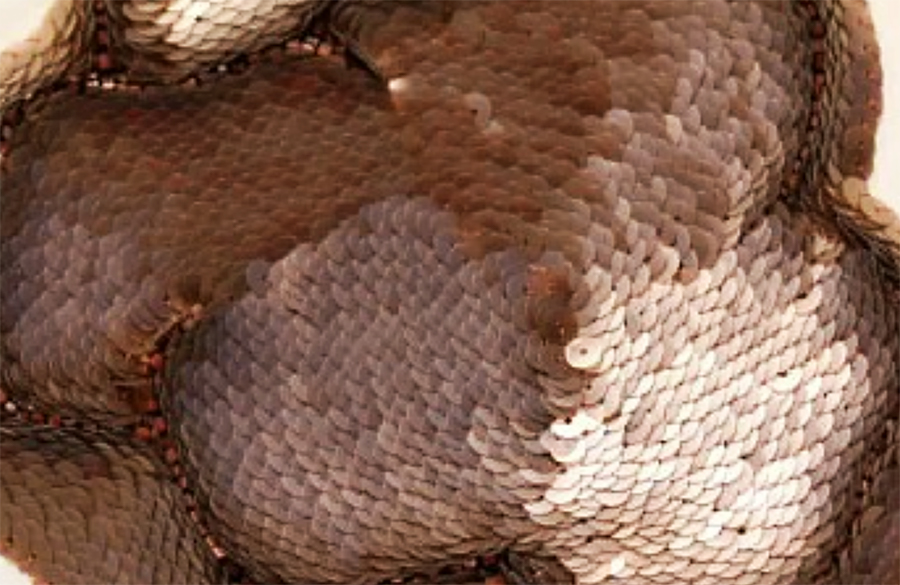 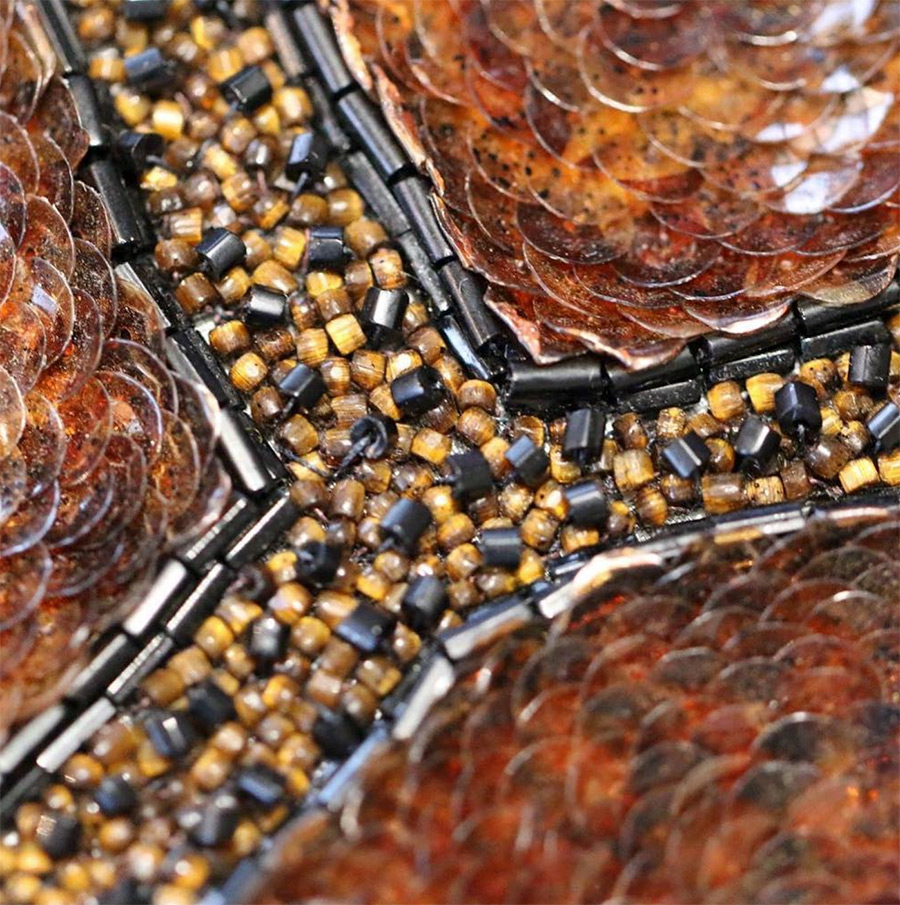 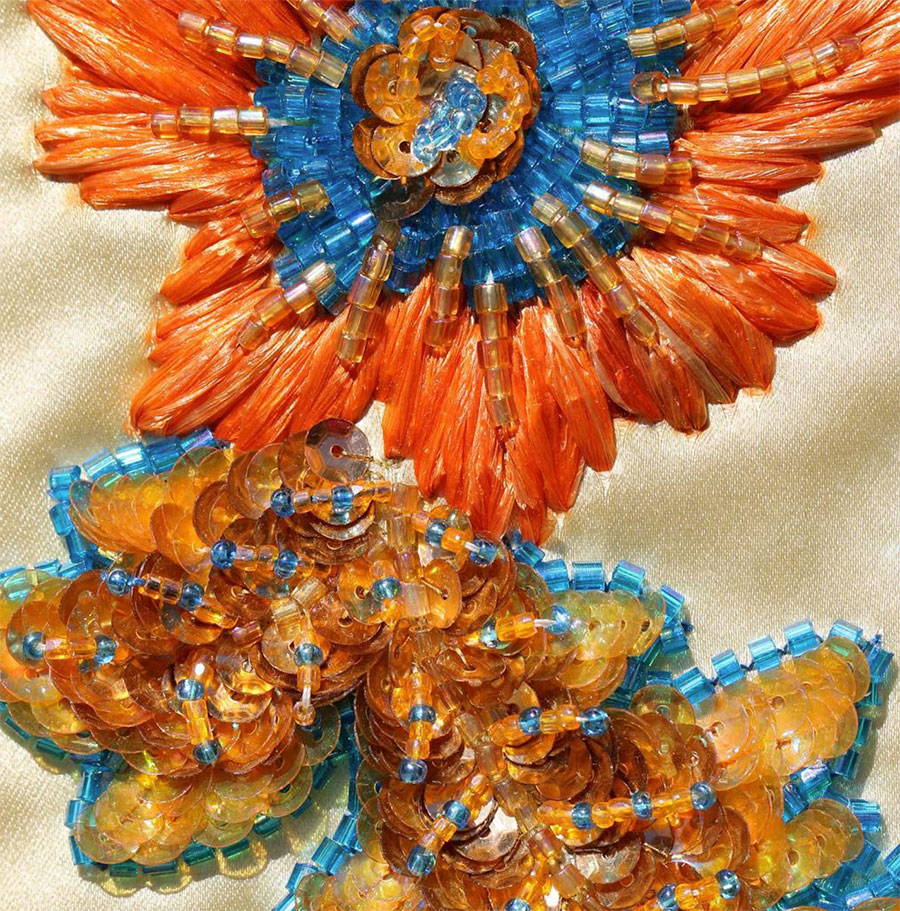 “We don’t do this job just for the money, we love it, and as long as we can stay independent, it will continue. We have our ethics in relation to ecology and respect for the work of creators. It happened that people came to us with photos of sequins supposedly from a designer, to ask us if we could reproduce them. But it was one of ours! Our “small” customers are often simpler. I have a friend who studied at the Lesage school at the same time as me. She lives in Japan and whenever she needs sequins, she orders from us. We also work with artists like Devi Vallabhaneni (devi.atelier) or Abigail Simmonds (abigail_simmonds) who use sequins in their work.” 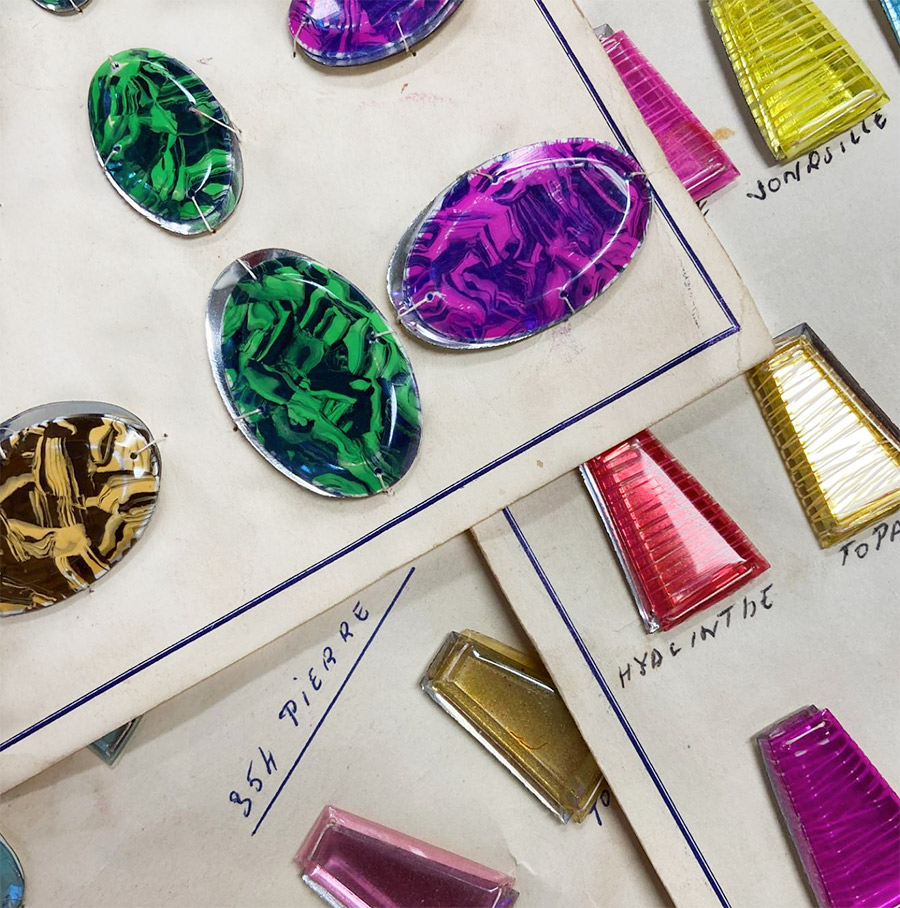 “In France, there are only 6 major embroiderer workshops left who can easily order from us. In recent years, small workshops have been developing but they often go through Indian craftsmen. You should know that there is no other factory capable of reproducing our 5000 shapes. The biggest ones (in China) have maybe 100-150 tools!”
A secure future? Let’s hope so !