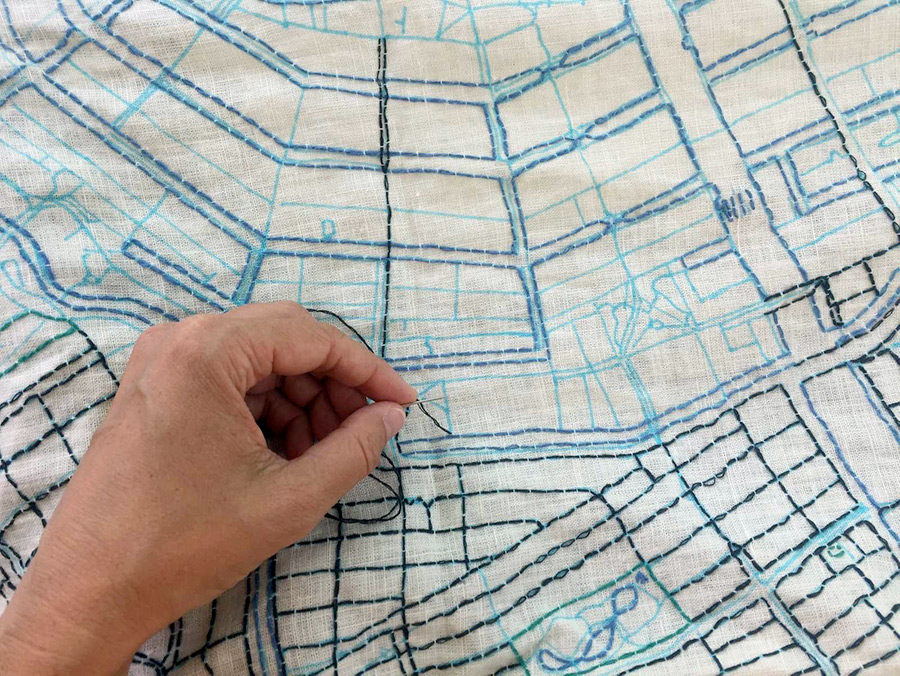 In Amsterdam (The Netherlands) © Liz Kueneke

Since 2008, Liz Kueneke invites people to embroider bits of their life on a map of their city. A needle, some threads and five continents later, we take a look on this deeply human project.
Text and photos – © Liz Kueneke – photos protected by copyright – thank you 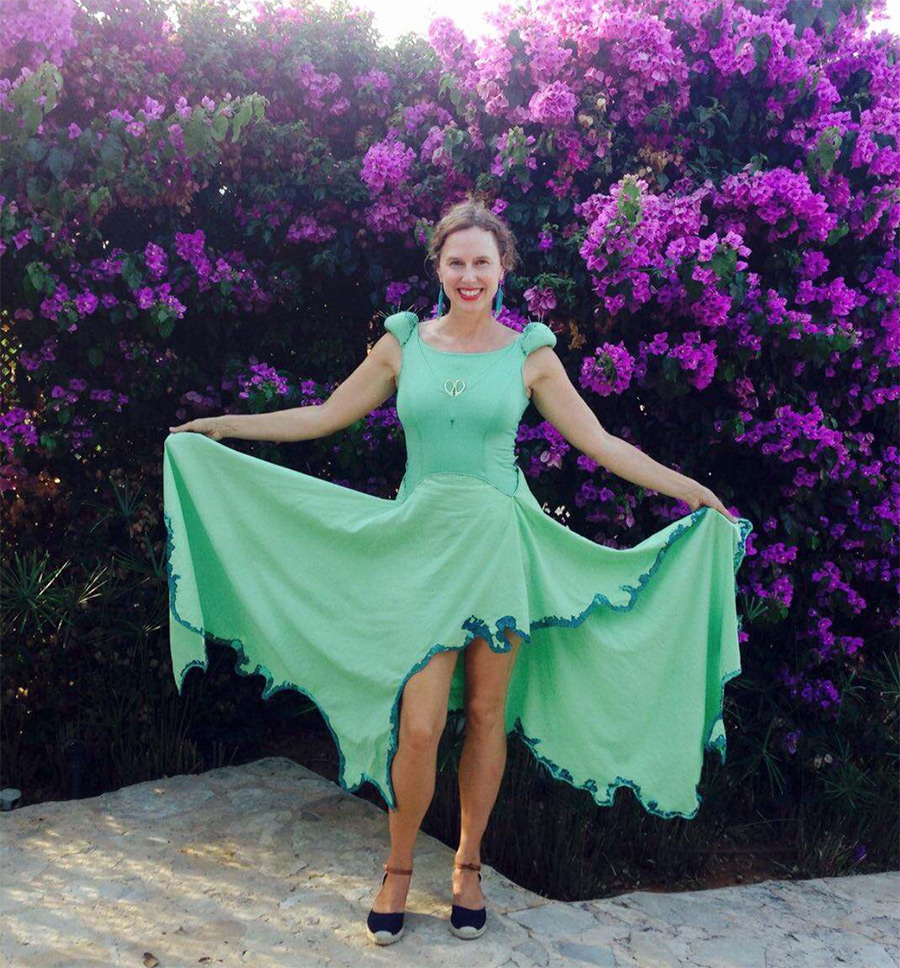 My name is Liz Kueneke, and I am a multidisciplinary artist. When I was young, I learned sewing and embroidery from my grandmother Dorothy, who worked in a fabric shop and shared with me her passion for textile and threads. Later on I studied in Los Angeles, where I received my Master of Fine Arts, and where I explored many kinds of arts. A few years later I moved to Barcelona, where I began to experiment with participatory maps. 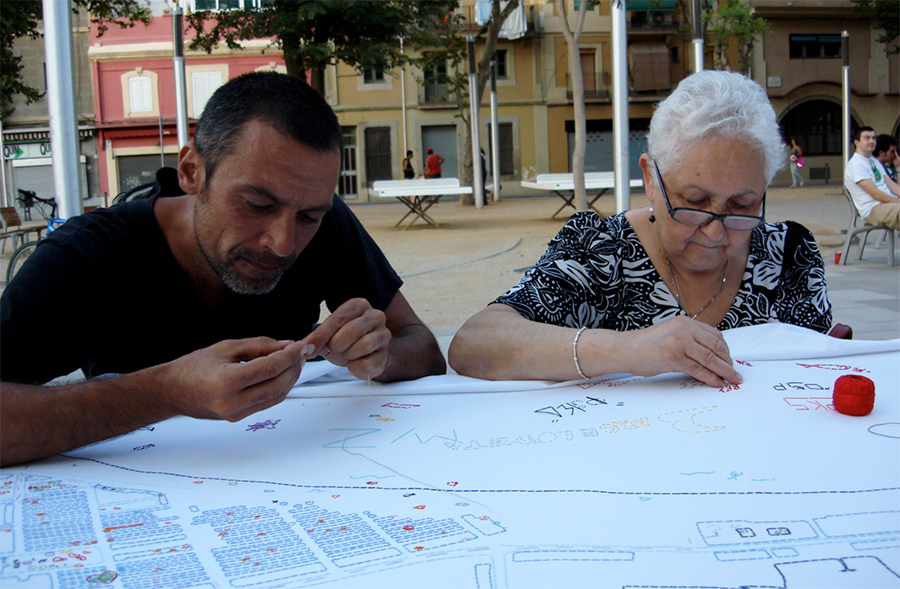 I was very interested, being a foreigner, in what each place meant to the local people…what were their memories attached to each street corner, abandoned building, and park bench. I began by collaborating with a Colombian artist named Margarita Pineda, and a Colombian architect named Ximena Covaleda. We did large-scale participatory mapping with people throughout the city. We also did some exhibitions in galleries and museums in which the maps were stitched, and people could mark places in the maps using pins and thread. 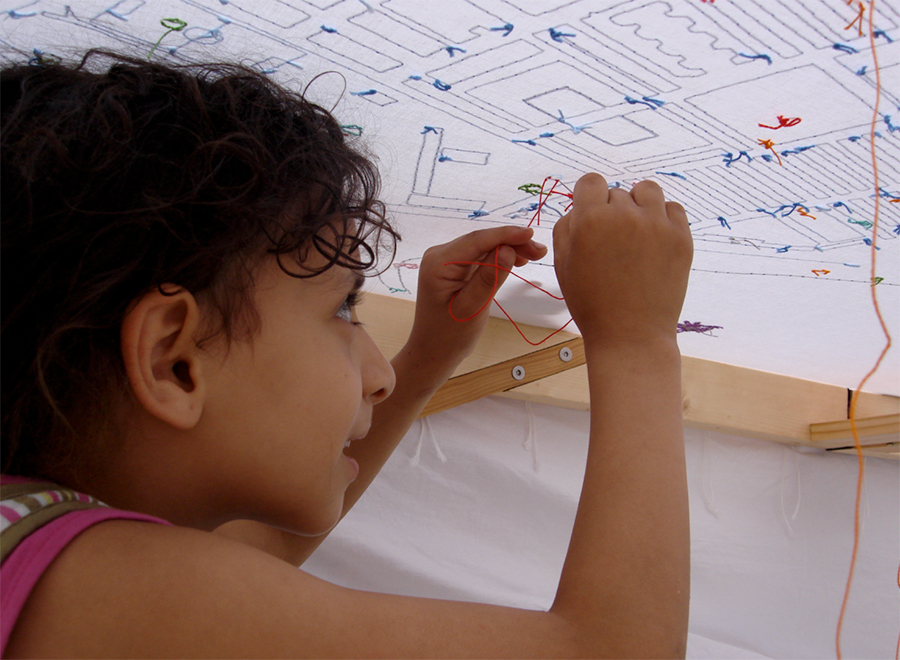 These experiences made me realize how much people wanted to tell their stories, and I decided to combine the methods we had been using, the participatory mapping in the public space, and the stitched maps. I was inspired in my grandmother, how she had quilting circles with her friends, in which they would all sit around in a circle and work on the same quilt together, while chatting for hours. So I decided to replicate these quilting circles. Traditionally they were something done only with close friends and inside, but I decided to bring them outside and amongst strangers where everyone would be contributing to the same community map. 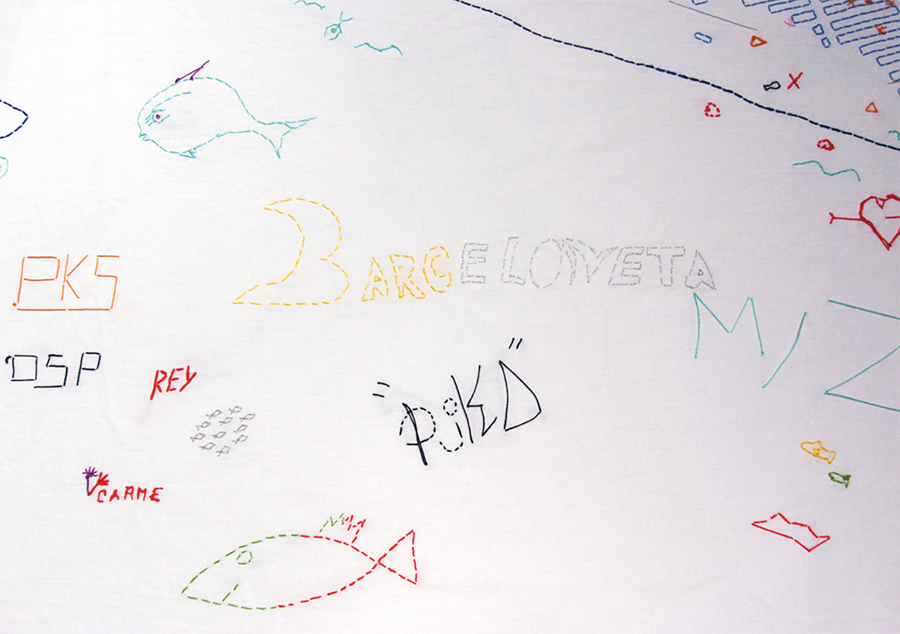 I started my project, which I called The Urban Fabric, in 2008 in my neighborhood of Barcelona, called La Barceloneta. First I embroidered the map, which took about 100 hours. I used a simple running stitch, which I like to call my walking stitch, as it felt as if my fingers were walking each of the streets of the neighborhood. I needed a mobile embroidery table…basically a table with no top, which I could attach the map to and also fold up and take up the many flights of stairs to my tiny apartment in this old fishermen’s village. Another architect friend Sigrid Ostlund designed and fabricated this beautiful wooden table for me. When I was ready, I sat out in the middle of the main square, with my embroidery stretched out, every day for about a month. 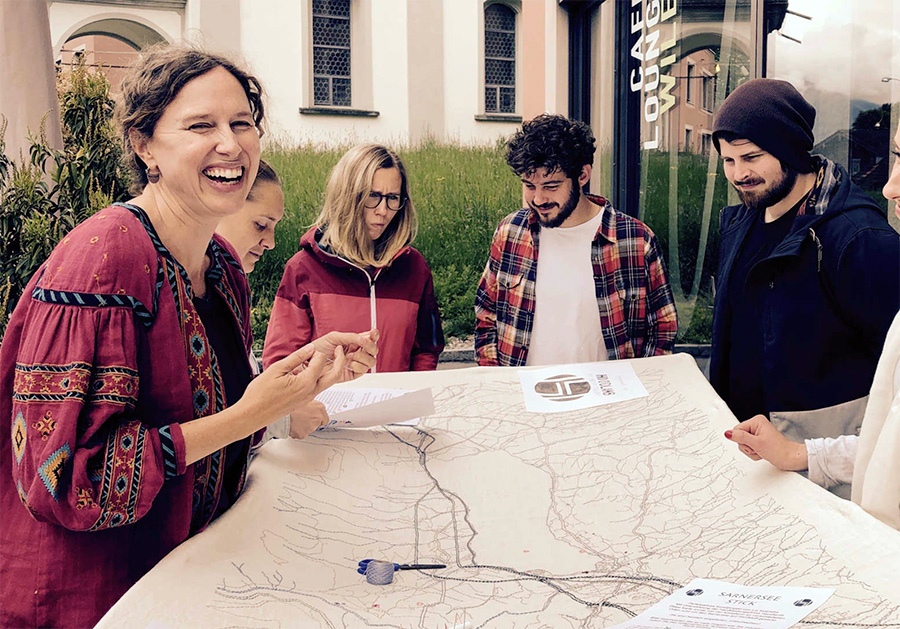 I formulated a series of questions for people, and each question had a certain symbol and colour. So for example, if they wanted to respond to me where there was a positive place for the neighborhood, they would embroider a small green circle on the map on that place. Or if they wanted to mark their house they used an orange star, etc. In the process of this community mapping, I learned countless things about the neighborhood where I lived…historical things, such as the story of the anarchists who, during the civil war, wanted to kill the local priest. One man said he wanted to make the priest really suffer and so he wanted to take him home alone. In actuality he hid the priest in his apartment for months and cared for him. When the tides turned and the fascists won, the priest could have condemned this man to death for being an anarchist, but he saved him.

I also learned many more contemporary things, such as the importance for the people of the public library and the civic centre, and their annoyance with the tourists who come and urinate on their doorstep. It was very beautiful to see many neighbours who had never spoken to each other before, ending up meeting around the map and stitching together. I also learned that to ask people to embroider their opinions, rather than just drawing them on a map or marking with stickers, made them stay much longer around the table. Embroidery for most was something they had never done, and they struggled, and thus learned something new, but also meant that they lingered much longer at the table, and this made the conversations between neighbors so much more interesting. 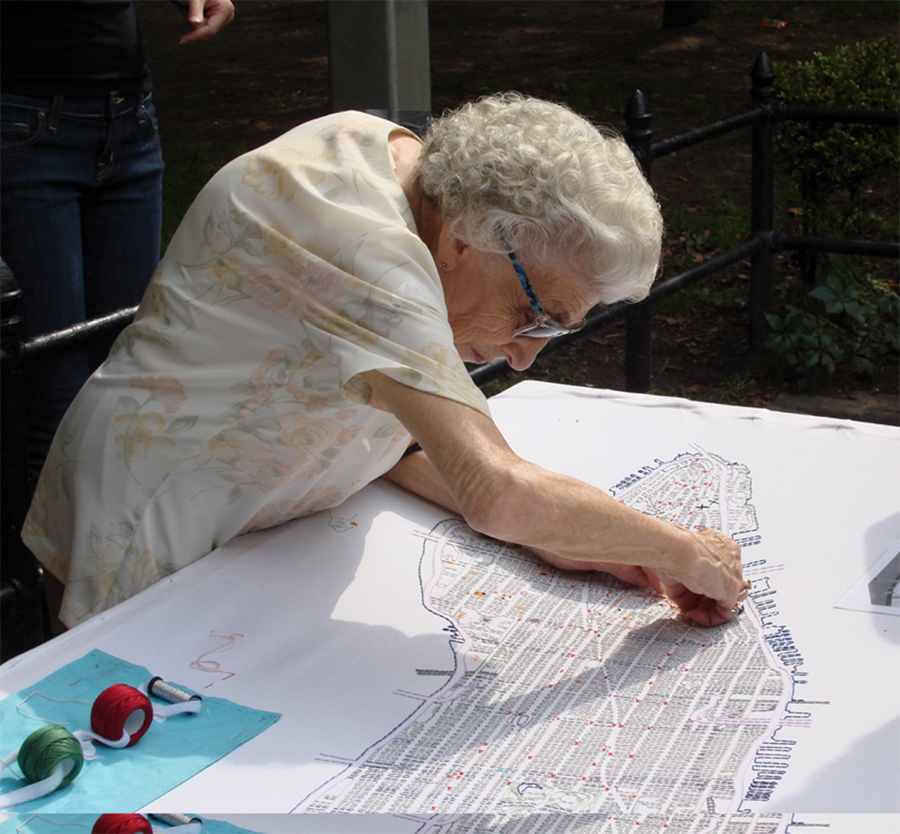 I found out that this technique was very interesting to get people to come together and discuss their neighborhood or city, and so I decided to take it to a psycho-geographical art festival in New York City. I embroidered the entire map of Manhattan and took to the streets there. I took the map all over the island, to as many different neighborhoods as I could, to get a huge variety of participants. 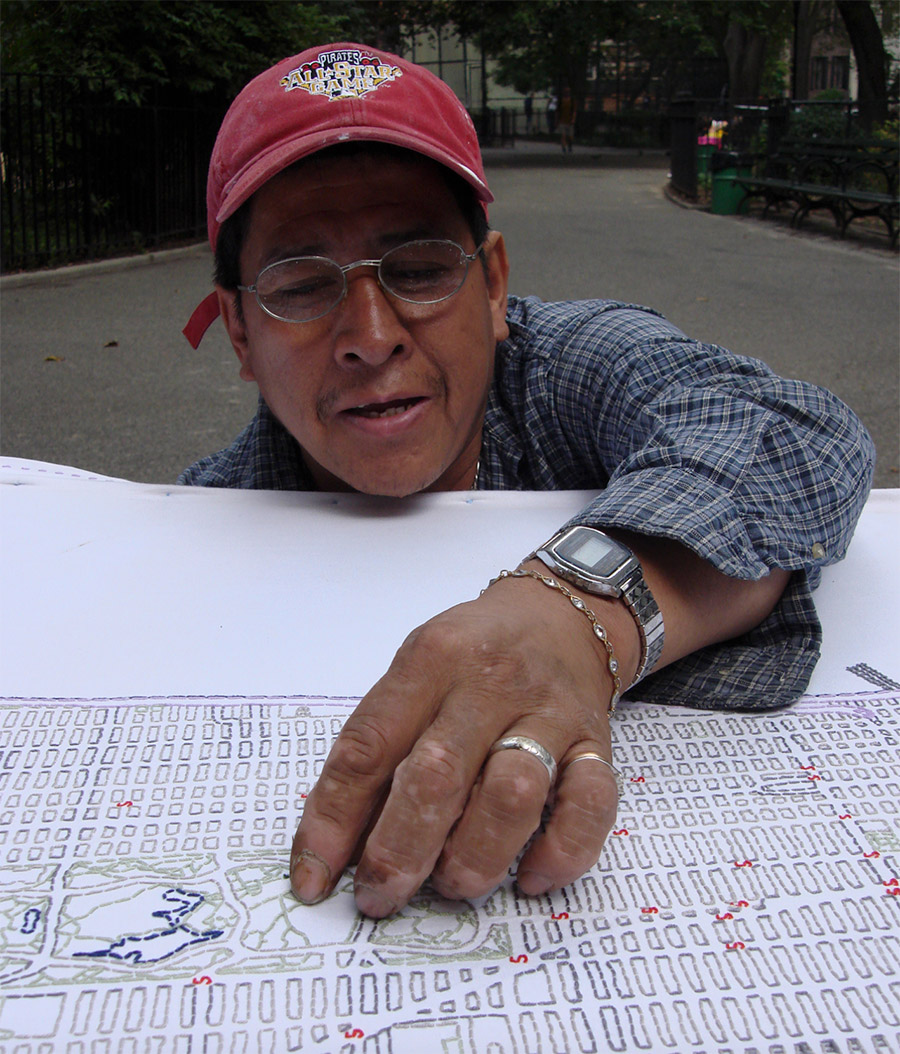 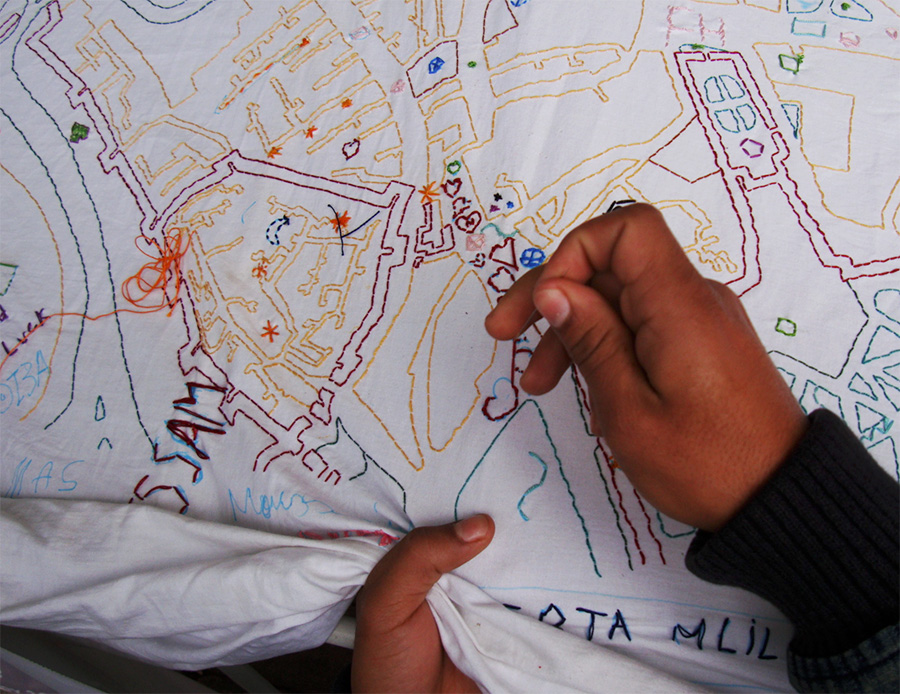 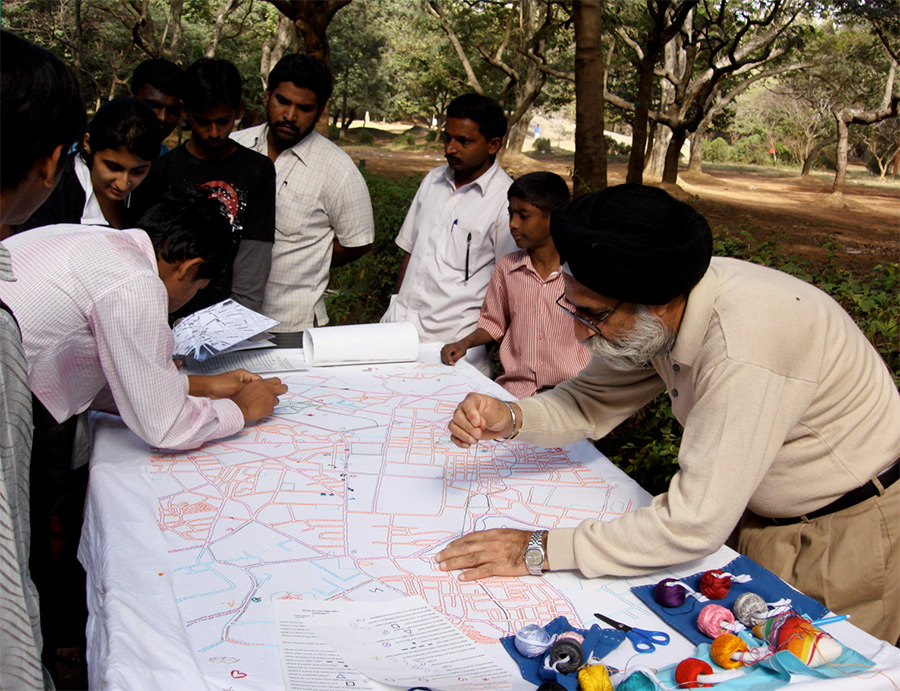 This experience was incredible, and I decided to keep going, and I ended up embroidering in Bangalore, India, Quito, Ecuador, and Fez, Morocco. In each location I first did an investigation with local people who helped me decide the questions that I should ask of people, as well as the colours that I should use for symbols, because colours mean different things in different cultures. For example, in the West, red may be a symbol of danger, while in India it is an auspicious colour, used in marriages etc. 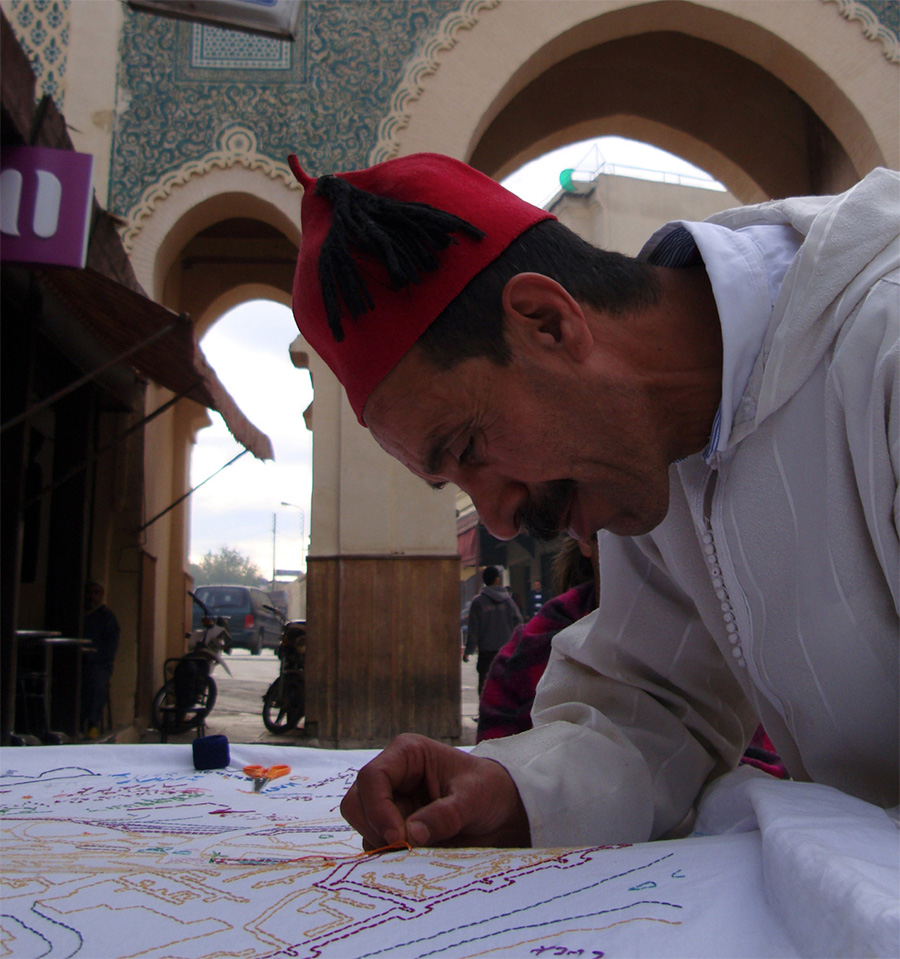 In every place I spent about a month collecting symbols from people, but also letting them embroider freely around the edge of the map. This also brought wonderful local flavor to each map. For example, in Barcelona, the local teenagers embroidered their graffiti tags into the map, whereas in Morocco people were embroidering in Arabic. I also discovered the local views on embroidery in each place. In the West there were many men who felt uncomfortable with the activity, whereas in Morocco and India, it is the men who usually do this work, and it was much harder to convince the women to participate (because they felt less comfortable joining a table full of men in a public space). 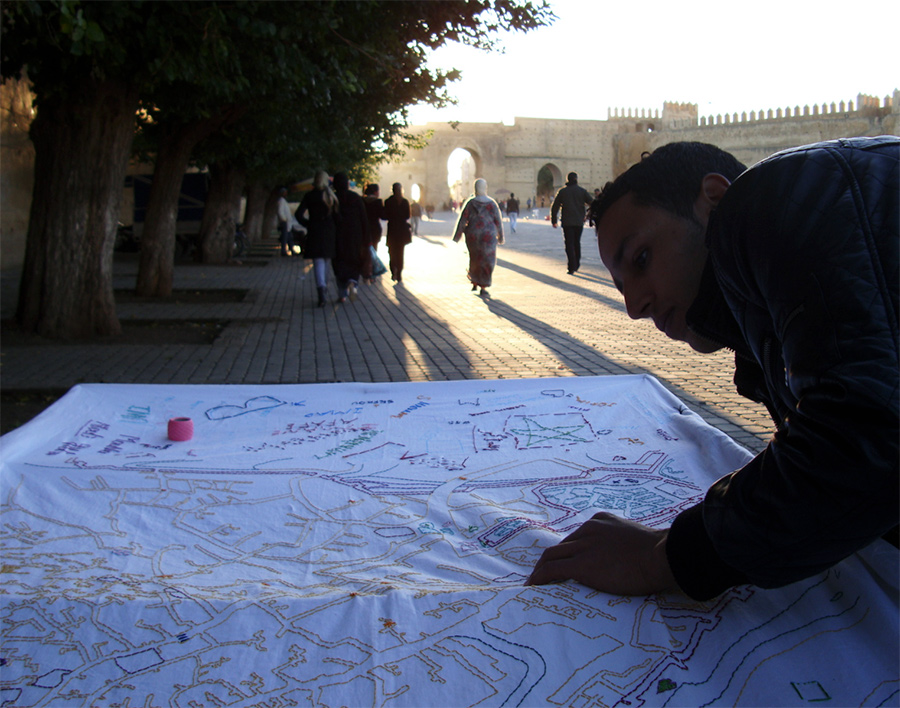 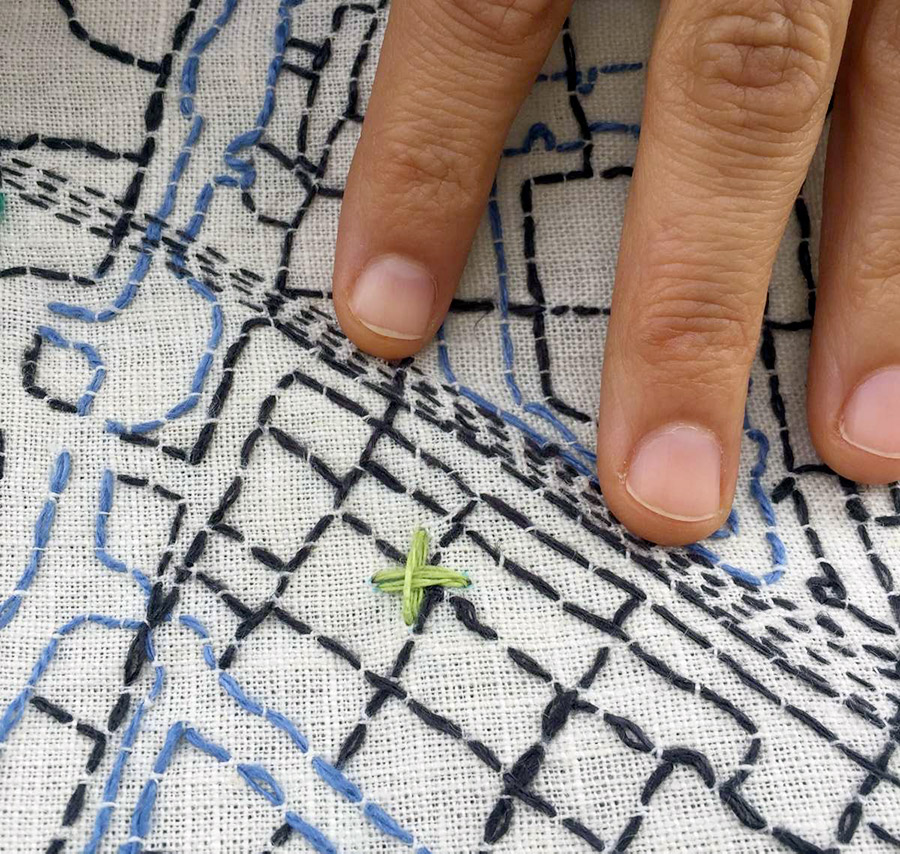 In Amsterdam (The Netherlands) © Liz Kueneke 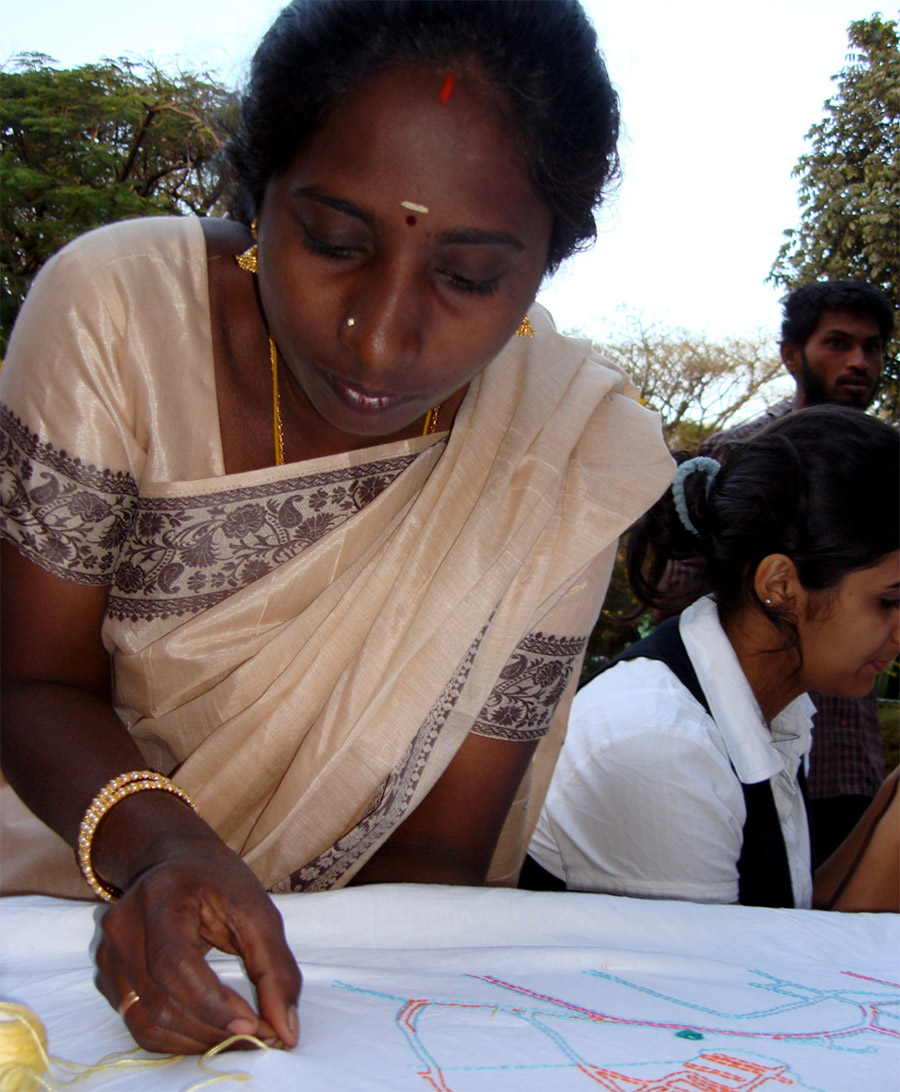 It was also interesting, for example in a place like India, to gather so many different people to the table…posh ladies in gorgeous saris and homeless children…and they would be rubbing elbows, sharing scissors, as well as their stories about their lives. 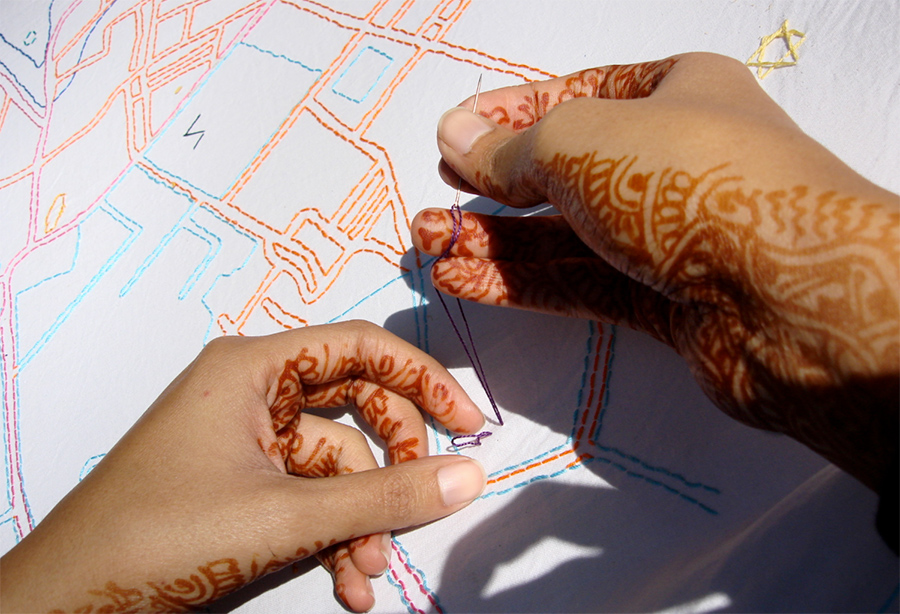 After visiting each of these five places, on five continents, I revisited them all to exhibit all the maps together to each community. I showed as well videos from each place, where I interviewed participants about the reasons of each marking they made. I found out that these people, from all walks of life, want the same thing for their city. They want safe places, where they can walk around at night without danger. They want plenty of parks and green spaces. They want less traffic and pollution. These are universal wishes which politicians and city planners should take into account. 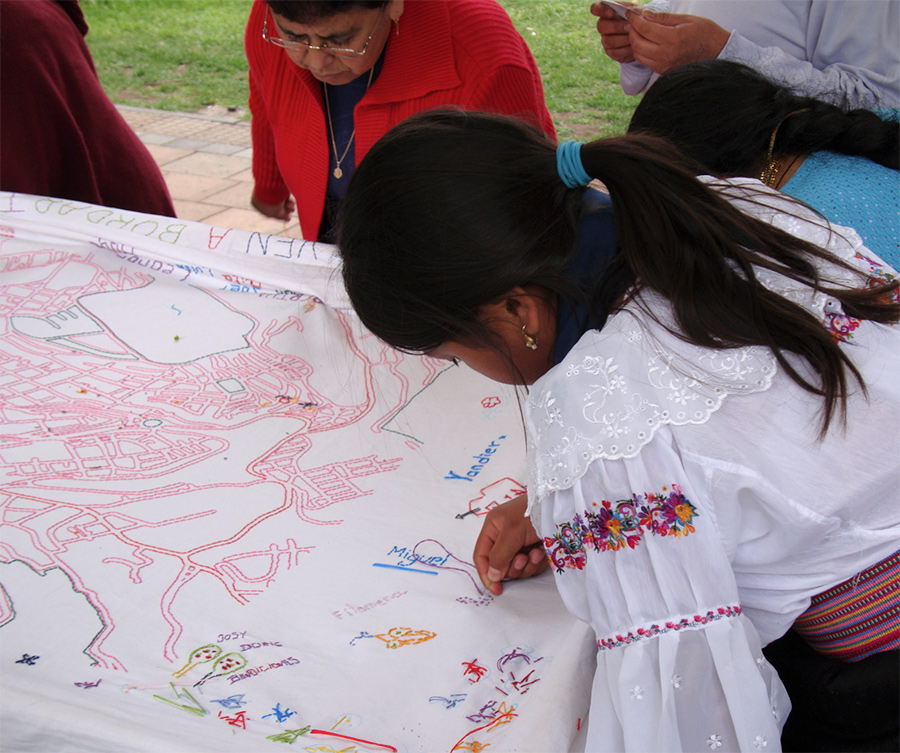 I have continued the project in other ways as well…I have done the project in Switzerland, Amsterdam, Los Angeles, and in Ibiza where I live, and have even created a map-dress with a local designer, Vanina Lefebvre. 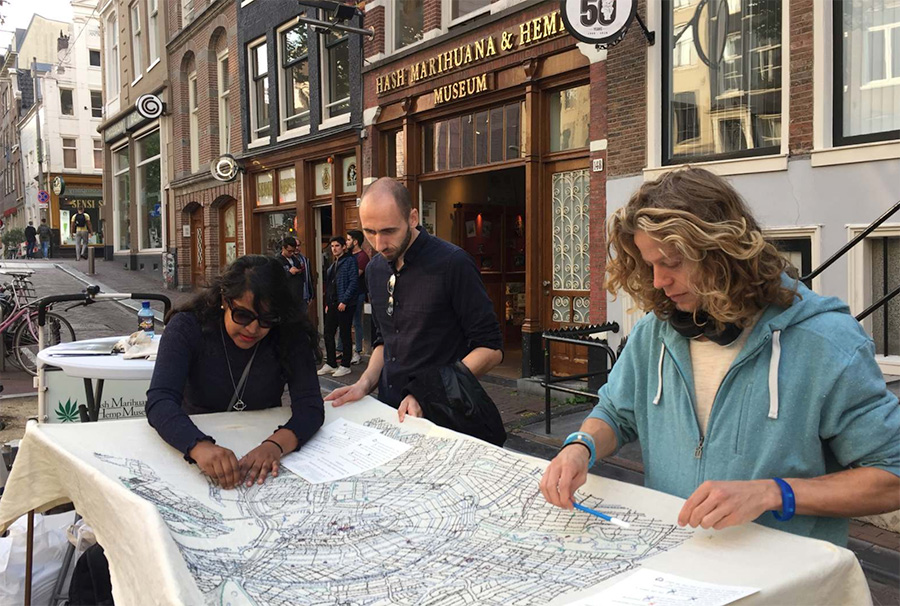 In Amsterdam (The Netherlands) © Liz Kueneke
A collaboration with the Hash Marihuana and Hemp Museum, and Hoodlamb, a hemp clothing company based in Amsterdam. 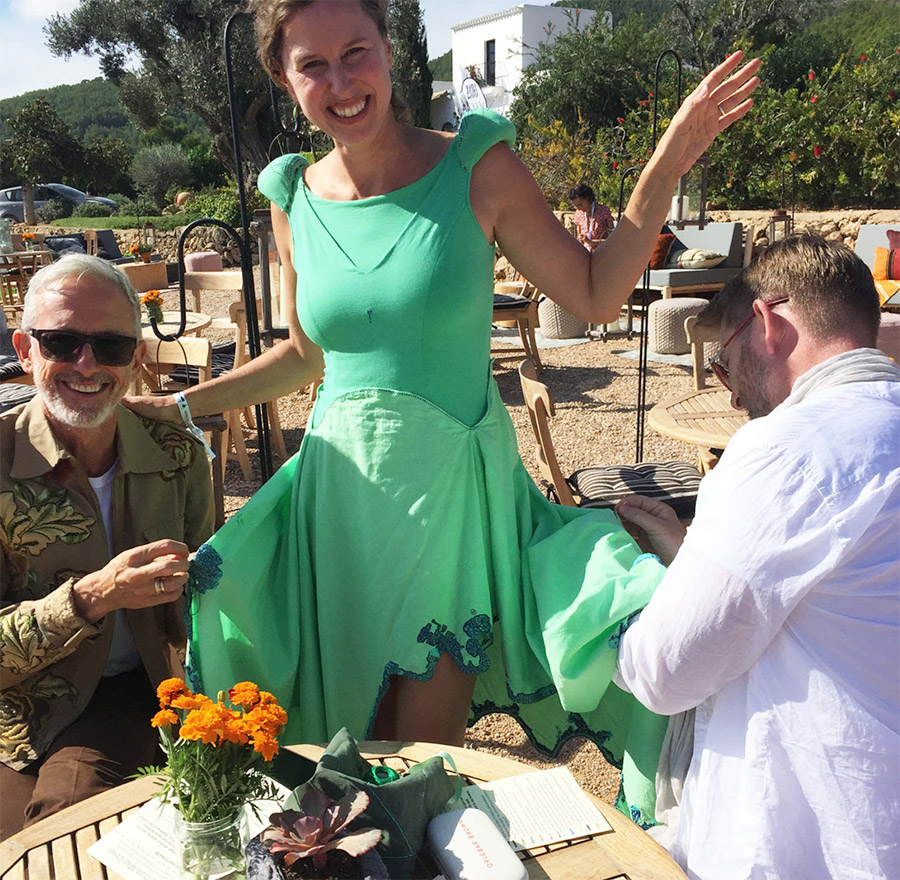 The map-dress eliminates the need for the table, as I simply wear the dress while people embroider onto it. The entire skirt of the dress is the map of Ibiza, while in the top portion of the dress there is a place for scissors and the épaulettes are the pin cushions where I keep the needles! The pandemic has slowed down the project a bit, because of the proximity of people that is needed, however I plan to continue embroidering places and exploring them, stitch by stitch! 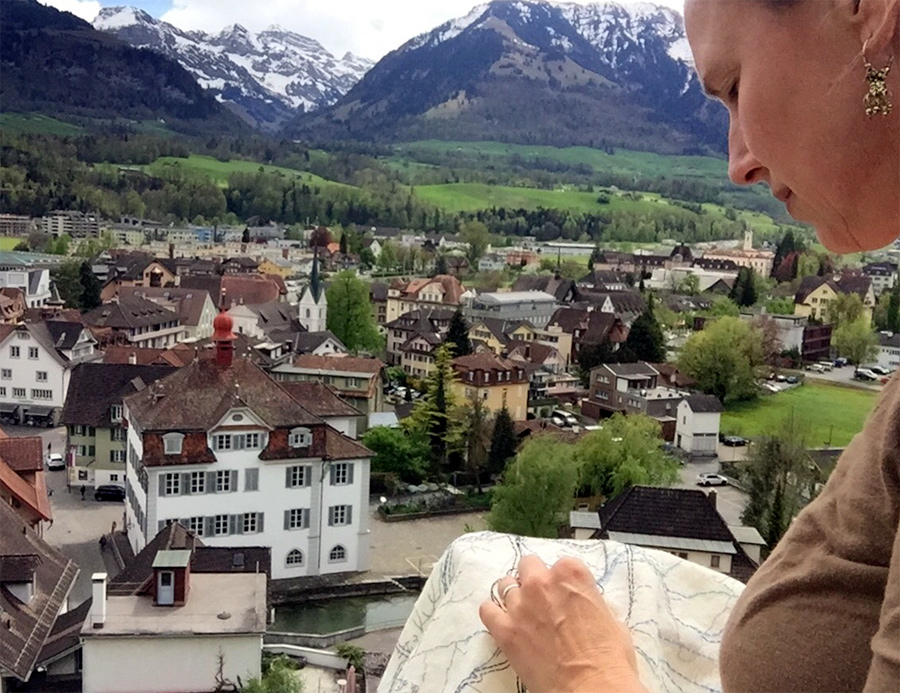 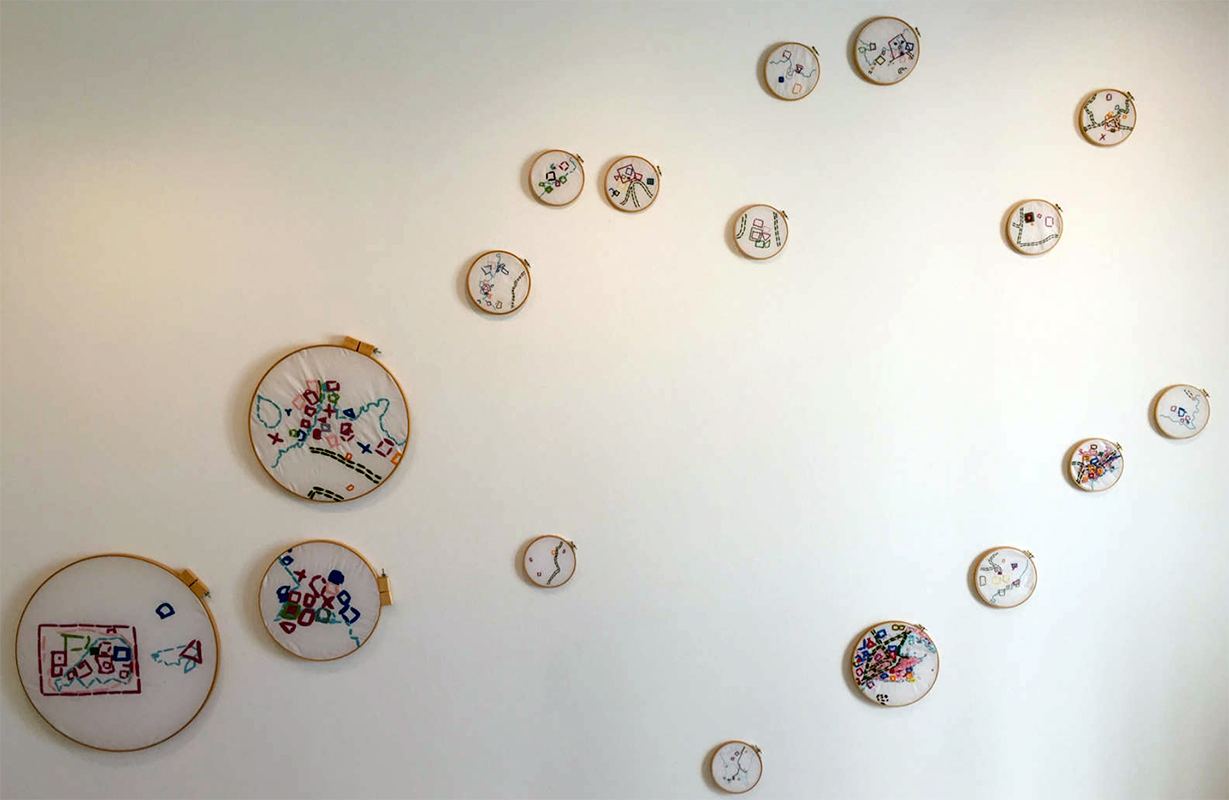 Exhibition of the embroidered map of Ibiza © Liz Kueneke

To follow this project:
Instagram: @the_urban_fabric
Website: www.lizkueneke.com
A short documentary about the project made by Pablo De Otto and Clàudia Sol Torelló
Here are a series of videos with interviews from each place